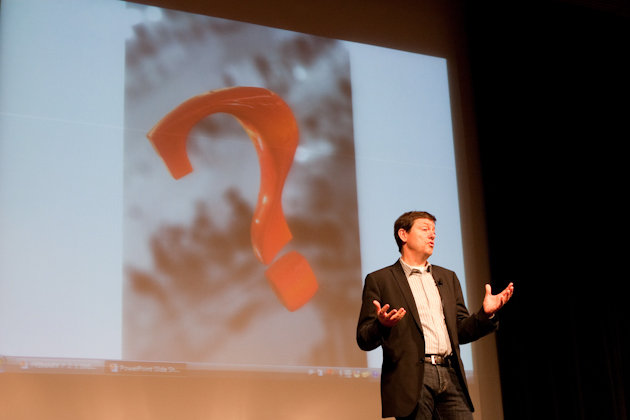 Twitter and Foursquare investor Fred Wilson shrugged off Facebook’s open graph, the social network’s strategy for mapping the web via people’s relationships and tastes, and called Apple evil for its increasing control over devices and the mobile ecosystem.

“Facebook is a photo-sharing site, really. Maybe with some chat attached to it,” Wilson said at the Geo-Loco conference in San Francisco today. “I don’t think the open graph is important. Everybody’s got a social graph. Every large-scale web app has a social graph. I don’t think Facebook’s social graph is anything to be scared of.”

[Update: Fred commented below this story (you can read his full thoughts there). He says he was trying to be fun and controversial on-stage. “I do believe, at least in some way, in everything I said. But please understand that I was consciously trying to be on the edge.”]

Wilson said that neither Google nor Twitter would probably ever rely on Facebook to power or socialize its web apps, both for strategic reasons and because the two companies already effectively have their own social graphs.

He decried Yahoo for increasingly relying on Facebook, which now can show visitors status updates from their friends on its homepage.

The company he said he worries most about at night as an investor is Apple.

“I think they believe they know what’s best for you and me, and I think that’s evil,” he said.

While Google’s Android operating system is on track to power anywhere from two to four times as many devices compared to Apple’s iOS, Wilson said developers weren’t yet migrating en masse to create apps for Android-based phones.

“It’s been a long time since they have released anything that has been truly transformative for the web,” he said. “The last thing may have been Gmail. They should buy somebody. YouTube was a great move. They weren’t getting video done and then they bought YouTube.”

“They should buy Facebook,”  he said to laughter in the audience. But as an investor in Twitter, he wouldn’t comment on whether the search giant should buy the company.

He also talked about the rapidly changing venture capital industry. Wilson’s firm, Union Square Ventures, has carved out a niche for itself by doing early-stage investments in New York’s blossoming tech scene. He said other legacy firms may struggle as they come to terms with smaller fund sizes.

“A lot of great practitioners of the venture business in the 1980s and 1990s are retiring. Venture firms are really about the people who are in them. It’s not that common that firms can survive the succession from generation to generation. So the new firms that are coming up that will be different from the top tier firms of the 1980s and 1990s.

The industry is much more capital efficient now so you have to be able to write a $1 million check now so you can be there to compete in the first round. I don’t think that’s true in life sciences and cleantech. Fund sizes [for consumer Internet startups] will need to get smaller.

The venture business is pecking order driven. It’s a lot like music. If you’re one of the top venture firms, you’ll see the best deals,” he said “There was a fairly static list of top-tier venture firms for 20 years and that’s what’s changing now. It’s causing a lot of hand-wringing.

Wilson, whose firm was an early investor in Foursquare, said the firm wouldn’t have made much of a return if its co-founder Dennis Crowley had decided to sell the company to a buyer like Yahoo. He said at that time, Union Square had only invested a half-million in the company.

“When you talk about entrepreneurs and their companies, it’s their baby. They want their baby to be the best it could ever be.” For Foursquare to become a company with a user base on the order of 100 million people, Wilson said, the company just needed time.

Wilson also talked about Twitter’s stability problems following a rough month for the company with significant downtime during the World Cup. Twitter oAuth tokens were down earlier this week, crippling startups who rely on the platform to power their log-ins.

“Twitter was built kind of as a hack, and they didn’t really architect it to scale,” Wilson said. “Then it started to scale, and they’ve never been able to catch up.”

But he added that now that the company has raised more than $100 million in the last year, it has the resources to attack its infrastructure problems. The company has more than 100 engineers now and recently hired away Michael Abbott, Palm’s head of software and services, to be its vice president of engineering.

Finally, Wilson gave his thoughts on a number of companies in the mobile space. He said prospects for Research in Motion, maker of Blackberry phones, weren’t good. He said it was “tough being the second fiddle” for Gowalla, another location-based social network that is a rival to Foursquare. He said the HP-Palm deal was a “great acquisition” for the company.