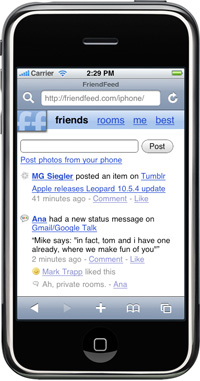 The social content conversation site FriendFeed has just rolled out a snazzy new interface for iPhone users. With increased font sizes, an easier-to-use navigation bar and a bigger space to post directly to the site, the update looks great.

If you look closely however you’ll notice something else in the interface. Just below the “Post” area there is a link to post photos from your phone.

Clicking on this takes you to a new page with directions for how to mail photos from your iPhone right to FriendFeed using the application Mail2FF. This is significant because just three days ago, FriendFeed announced the hiring of Gary Burd, another former Googler (many of the site’s current employees are former Google employees), who wrote Mail2FF using FriendFeed’s API.

Once again, FriendFeed is wasting no time with improving its service. If you truly believe that FriendFeed is going to kill Twitter (which I don’t), this update may be more ammunition for you. I think I just found a new favorite iPhone app.

update: I noticed the ‘edit’ comment feature no longer was available, so I left a note in the FriendFeed thread for this post. Immediately co-founder Bret Taylor responded that it was an oversight and would be fixed.

I just tested the posting of a photo to FriendFeed (via Mail2FF), it works brilliantly; so fast. Unfortunately due to the lack of copy and paste on the iPhone, it’s a bit of a hassle typing in that long email address. I suggest you send a test email first so the address will be saved into your iPhone’s address book.

Even if you don’t have an iPhone you can see what the interface looks like by directing your browser to this URL: http://friendfeed.com/iphone/

update 2: In a comment below, FriendFeed’s Kevin Fox says that they hope to have a solution within the next few days for the copy & paste situation I outlined above.