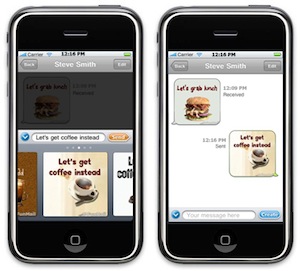 FunMobility, the developer of a bunch of social mobile applications, is releasing a new iPhone app that chief executive Adam Lavine says will finally convince people to use their phones’ multimedia messaging (MMS) capabilities.

It is called FunMail, and it automatically offers up suggestions of images you should send along with your text messages.

Lavine points to a study FunMobility commissioned from Frost & Sullivan showing that only one out of every 70 mobile messages is sent using MMS (i.e., a protocol that allows the sending of media, such as photos combined with text). That’s because the amount of images users have on-hand is usually limited to images taken with their camera, so it’s rare when they’ve got a picture that functions as the perfect illustration for the text message they want to send. FunMobility, on the other hand, has a library of images, and automatically recommends one to accompany your message, making the process much easier.

For example, if I invited a friend to a party, I could add a party image to my message. And if they wanted to go to a concert instead, they could send me a response by adding an image of a musical instrument to their message. This isn’t exactly something I’ve been dying for, but it sounds fun — plus, FunMail isn’t aimed at old curmudgeons like me, but rather users in the 18- to 24-year-old range.

The real differentiator from other MMS and greeting card apps, Lavine said, is a technology FunMobility calls the Media Brain, which can perform semantic analysis of text in 50 languages (with some help from Google Translate) to suggest the most appropriate image. It also learns from the images you send, so the more you use it, the better its recommendations.

FunMail is free — the company plans to make money by selling a version to mobile carriers, and by charging for premium content. You can also use it to post messages to Twitter and Facebook. On all three platforms, you can send FunMail messages to friends who don’t have the app installed themselves.