The Genius features built into the new iTunes version 8 are amazing. Genius playlists build on-the-fly music playlists based on the music you have on your system. It’s lightning fast and has led me to re-discover tracks from my collection that I’ve long neglected. But it’s Genius sidebar that is the more interesting part of the software.

iTunes Genius sidebar is an area the resides on the right-hand side of iTunes and dishes out music recommendations based upon what you are listening to at any given time. The real power of this is that with one click you can preview and buy any of the recommended songs from iTunes and have them immediately added to your music collection.

It’s music discovery at its finest.

After seeing how well it worked during the hands-on session following Apple’s “Let’s Rock” event, I asked an Apple representative if they expected the feature to spur iTunes sales? His smirk and chuckle were telling. This could be absolutely huge for Apple. But…there’s a “but.” 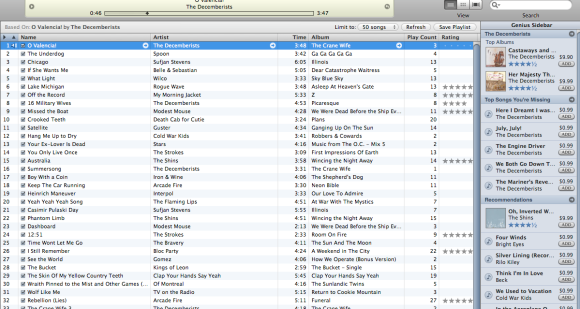 Despite promises by Apple chief executive Steve Jobs himself, iTunes still is lagging badly in bringing DRM-free music to its store. DRM stands for digital rights management, it’s a data security system that stops users from illegally distributing copyrighted material. It also, however, creates a barrier to entry for some users.

You see, by buying DRM-protected music from iTunes, you are locking yourself in to using iTunes and iPods to play those files. They won’t play on Windows Media Player or on SanDisk MP3 players for example. Though iTunes is the dominant online music store and the iPod is by far the dominant music player with over 73 percent of the market share in the U.S., not everyone has or uses them. And not everyone wants to.

Jobs said last May that half of all iTunes’ songs would be DRM-free by the end of 2007. 2008 is coming to a close and that goal still hasn’t been reached. Most would agree that this isn’t Apple’s fault — it’s the record labels — but it’s still a glaring problem.

Just look at the list of the top selling songs on iTunes in the picture below. Out of 37 tracks listed only 4 are available in DRM-free form, which Apple calls “iTunes Plus.” (Indicated by the plus sign next to the price.) Of the entire top 100, only 10 are iTunes Plus tracks. Pathetic. 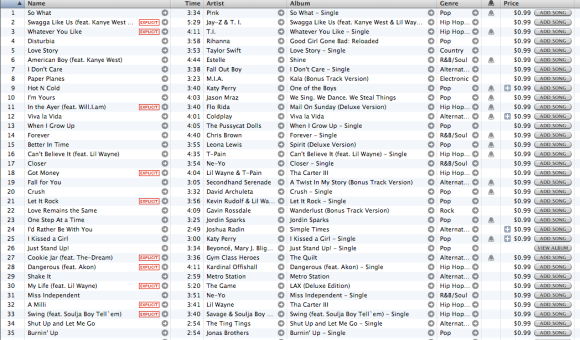 If Apple was able to convert the entire iTunes store to be DRM-free, music purchased through it could be played on any device or software. Jobs made it pretty clear last year that he wanted to do that, but the record labels which Jobs has held under his thumb for some time appear to be fighting back and withholding DRM-free tracks like petulant children. They even give their music DRM-free to competitors like AmazonMP3.

That, in my opinion, makes AmazonMP3 a better store than iTunes, and that is why I do my music shopping there. This new Genius sidebar feature turns iTunes into arguably the best music discovery software, but until I’m comfortable buying music from it, it doesn’t really matter.

Certainly not everyone has this complaint. But that’s mainly because most people don’t understand that they are buying something which may not work in the future if they start using something other than iTunes or an iPod. For others, iTunes ease-of-use far outweighs that risk, but it is still a very real risk.

A risk that is making me forsake what could very well be digital music nirvana (and a money vacuum) in the iTunes Genius sidebar.