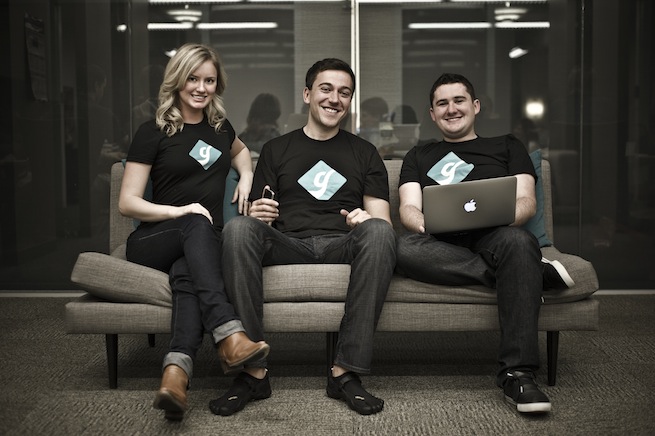 Getaround, the car-sharing marketplace that makes it dead easy to take a spin in a stranger’s car, has pulled in $13.9 million in first round funding from an all-star cast of investors: Menlo Ventures’ Shervin Pishevar, Eric Schmidt’s Innovation Endeavors, actor Ashton Kutcher, and Yahoo CEO Marissa Mayer.

“Our investors want to disrupt transportation as much as we do,” said company co-founder Jessica Scorpio (pictured above). “There are way too many cars on the planet.”

Scorpio told me she was first approached by Mayer, who invests in about five or six companies a year, at TechCrunch Disrupt, where the company launched last year. This is Mayer’s first investment since joining Yahoo as CEO and follows recent investments in Airtime and Square.

San Francisco-based Getaround was founded in 2009 and has grown quickly in recent years, expanding to new cities and signing up over 10,000 car owners across the country. Scorpio told me the startup recently eclipsed rival Zipcar, which currently owns about 8,000 cars. International expansion is in the cards, but the company remains focused on the U.S. market.

Scorpio said it was the hardware that sold Mayer on the concept. Once installed, the Getaround CarKit allows cars to be unlocked via a smartphone. This is the key differentiator, as it takes the pain out of the hand-off process between renter and owner. Although Scorpio said she views the main obstacle as car ownership, Getaround faces competition from Zipcar, Zimride, Car2Go, and Relayrides, as well as a host of newcomers in the hot car-sharing space.

Scorpio told me the company plans to use the funds to expand into new cities beyond San Francisco, Portland, Austin, and San Diego and to forge partnerships with key players, such as car dealers and auto-makers.

The company may also search for new ways to monetize; it currently makes money by charging the car owner a 40 percent commission. This may seems high, but it’s a better alternative to leaving your car in a lot to slowly gather dust.

Funding aside, since Getaround’s inception, Scorpio said she had a niggling use-case in mind, one that she hasn’t been able to let go. “A lot of people have approached us and said they would like to share their car on Getaround but couldn’t manage it themselves,” she said.

So today, Getaround also launches a product in beta called Getaway. Getaway is a new service for car owners who want to rent their car on a full-time basis. It’s an ideal option for college students, backpackers, or business travelers don’t want to sell their car or shoulder the cost of storing it.

Getaway is currently only available in San Francisco and Chicago. 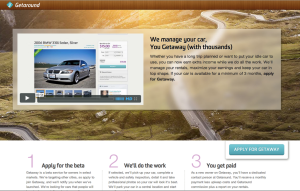 On Getaway, car owners are guaranteed $1000 a month, or Getaround will make up the difference. The guidelines for Getaway cars remain about the same: the company will only accept automatics that are under-five-years old, and have accumulated less than 100,000 miles.

To ensure your car won’t be in the wrong hands, Getaround will deliver a monthly report detailing where the car has been driven and the milage. If there’s a special request (for instance, you only want to rent to an urban driver), the company’s support team is willing to negotiate.

Scorpio told me that competitors in the ride sharing space are sprouting up fast and furious, a direct result in renewed interest in the collaborative consumption space. “When we started the company, the sharing economy didn’t exist so we knew we had to change people’s mindset,” she said.

Scorpio credits social networks with improving transparency and mitigating risk for the owner. Strangers will trust each other with their most intimate possessions – their cars and homes — knowing through Facebook and LinkedIn that they are only 2 or 3 degrees of separation away.

The round is led by Menlo Ventures’s Shervin Pishevar, who will join the company’s board. This is the largest round since the raised $3.4 million in September, 2011.