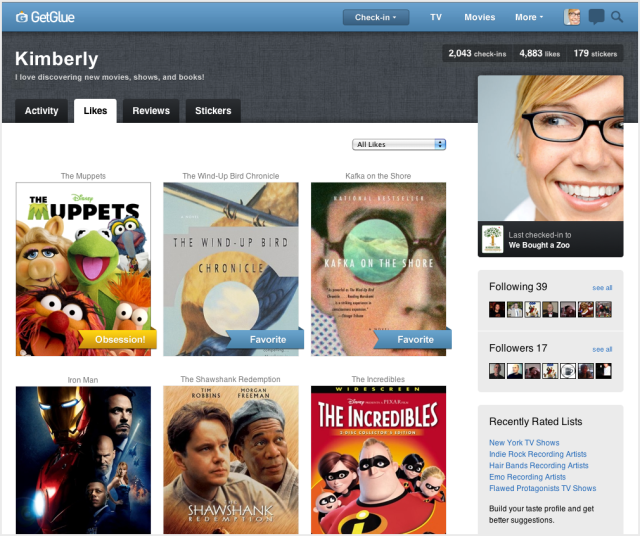 It’s not in the same league as Facebook or a Twitter, or even half the size of Instagram, but GetGlue’s highly-specialized social network for entertainment watchers could be on its way to superstardom.

On GetGlue, more than two million die-hard entertainment fans check-in to television shows and movies, over the web or from mobile devices, to share their enthusiasm and get rewards for their viewing behaviors. Seventy five major television networks have already taken notice, and now investors are doubling-down, placing a $12 million bet on the startup’s chances at mainstream fame.

“2011 was a year where we were doing a lot of innovation in the social TV space,” GetGlue founder and CEO Alex Iskold told VentureBeat. “With this financing, we can continue to play a market-defining role as social television goes mainstream.”

But what is social television, exactly? It’s a niche section of social networking dedicated entirely to (usually influential) entertainment enthusiasts, and the networks and brands that want to reach them.

The space started to take shape in late 2009 and early 2010 with the launch of GetGlue and several other similarly purposed services such as Philo (shutdown after being acquired by Local Response), Miso and Comcast’s Turnerfish, all of which proffer a second screen application experience for entertainment-sharing and chatter. Social television has since evolved to include network-branded applications around popular shows. And, perhaps the biggest sign of a genre-in-the-making, Yahoo acquired television-tagging application IntoNow just a few months after it launched.

Whether mainstream viewers want to take part in these back-channel behaviors is questionable. There’s more than enough evidence to support the idea. After all, a growing number of TV watchers are multitaskers who use their tablets or smartphones for additional stimulation. But it’s taken GetGlue, one of the leaders in the space, more than two years to get to two million members. We’re talking small potatoes compared to Facebook’s 800 million members or the 15 million users of photo-sharing sensation Instagram.

GetGlue’s small user base could be a bit misleading. Application users are an extremely active bunch. Altogether, they have engaged with GetGlue more than 350 million times by checking-in to content, or leaving a rating or review. And the startup saw hockey-sticky growth in check-ins in 2011 — with the exception of December — Iskold said. In November 2011 alone, GetGlue had almost 20 million check-ins.

It’s enough activity that major television networks have run upwards of 680 badge and sticker-style promotions around their shows on the service. And more than 30 networks have embedded GetGlue check-in functionality into their own second-screen applications. The startup made money in 2011 with show sponsorships, said Iskold. Big brands such as Pepsi, HTC, Coke and the Gap all sponsored GetGlue show rewards and content (usually involving the same shows that they were already sponsoring on television).

GetGlue, which released a new version of its flagship iPhone app and revamped its website Monday, will focus its 2012 road map on personalizing the entertainment guide for the user, introducing more supplemental show content and working to allow networks to better customize their experience, Iskold said.

So could this be the breakout year for social television and GetGlue? We’ll be watching (pun intended).

GetGlue’s $12 million round of financing was led by New York-based RHO Ventures. Investors in the startup’s previous $6 million Series C round — Time Warner, RE Ventures and Union Ventures — all re-upped in the new round.