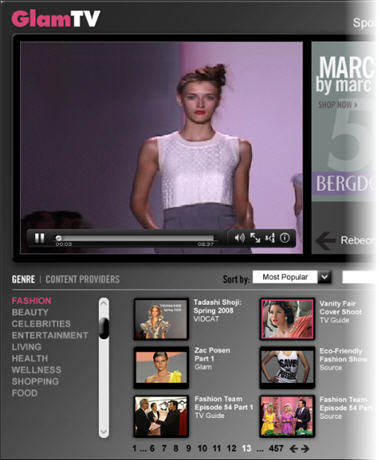 Glam, the fast-growing online advertiser and publisher for women, is announcing a new video offering that may make it easier to monetize videos on the Web.

Beginning tomorrow, Glam is letting publishers on its network — which reaches 64 million people — to run videos produced by various media companies, including Sony, Lifetime and E! Glam is licensing the video from producers. Glam will also allow third-party publishers to run the videos after they apply to be part of the program. Glam is also serving ads within the video if so desired by the publishers.

With this offering, Glam takes on sites like VideoEgg, which is also offering a network for video ads. It also brushes up against Hulu, the site that runs video content from companies like CBS and MTV. However, Glam may seek to partner with Hulu, giving it a way to distribute its video to other sites.

Called the GlamTV Platform, it also lets its publishers run video from other video providers, including YouTube, Brightcove and their partners (CBS, Discovery, Fox, etc) — all under the same single license. The program also includes indie video producers, such as WatchMojo and Beautiful Stranger.

Glam is using Brightcove‘s technology for video distribution, among others. Glam takes a cut of the revenue, the rest being split with its publishing partners and the video producers.

The GlamTV Platform gives publishers a dashboard, where they can pick the size of their video, the theme and the code needed to embed the video. Advertisers get to tailor the sort of advertising in the video.

The move is part of a wider effort by Glam to reach high-end advertisers, many of whom get exposure on good quality video but who want more distribution online. Glam is also offering video publishing rights to other content networks, such as Federated Media, iVillage, Martha Stewart.

Meanwhile, Chief executive Samir Arora said he hopes to invade the separate market for “display” advertising, or branding ads on Web sites. This area has o far is dominated by players such as Yahoo, AOL, Fox and MSN. It’s a place that hasn’t been penetrated by Google. Selling display advertising for big brands also offers opportunity because no one has figured out how to adequately target users according to behavior and demographics.

It’s a slight change of strategy by Glam, which earlier had suggested it might try to add more social networking features. But Glam’s Arora said social networking sites are having a difficult time making advertisers pay more than a pittance on their sites, and so Glam is focused more than ever on developing “content” sites that can draw high-paying display advertising.

Separately, I heard today that Glam received an acquisition offer of $1.3 billion in the past few days but is unlikely to take the offer, according a source close to the company. Glam’s investors see a bigger opportunity for Glam to build a large business for high-end display advertising, the source said. Some critics will say Glam would be foolish not to accept such an offer.

Glam faces big challenges now that the advertising market has slowed down, and enters a market where agencies are jealous of their turf. However, the fact that Yahoo has lost focus on its display business does afford quite an opportunity for Glam.

Several deals are percolating here at the AllThingsD conference in Carlsbad, Calif, where the major investment bankers are walking the hallways. The conference comes at a time when Microsoft is talking about the need to get “scale” for its advertising business.

Disclosure: VentureBeat’s business manager is related to a Glam co-founder. 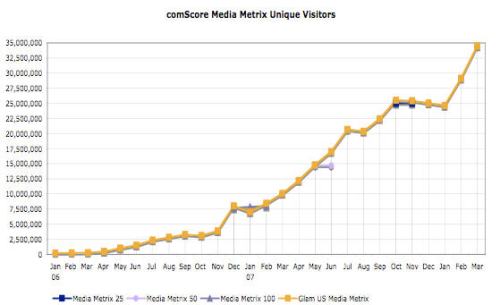