It looks like a huge swath of Gmail users are having trouble accessing their accounts right now, and have been since around 2pm Pacific. As far as I can tell, this outage affects all of our staff VentureBeat email accounts, as well as our personal Gmail accounts. There are plenty of reports from others on Twitter and FriendFeed, too, including one from Digg founder Kevin Rose. (See the screenshot from writer MG Siegler’s FriendFeed account at the end of this post.)

There’s really no way to overstate how this is puts my workday on complete hold until things get fixed. All of my emails are stored on Gmail, and are now inaccessible. Ditto most of my work-related contacts and documents, which means that I may not be able to prepare or even make the calls I have scheduled for later this afternoon.

I know I’m not the only VentureBeat staffer to make their Gmail account the center of their work life; in fact, we’ve bugged Editor Matt Marshall about the fact that he still uses Outlook. Looks like Matt made the right call — if I was using Outlook or another desktop email program, I’d still have trouble accessing and sending new emails, but at least all of my old messages would be available.

This follows a similar outage last week, but judging from my anecdotal evidence today’s problems seem more widespread. Some are reporting difficulties in accessing Google Apps premiere edition as well. And while I’m complaining about Google, I should add that I’ve noticed longer delays in our Google Groups email lists — delays that can last 12 hours or more, which is an issue when you’re sending time-sensitive emails.

These problems, especially coming back-to-back, really undermine the idea that Google’s services like Gmail are good enough for business use. If nothing else, Google needs to make its rumored integration of Gmail with Google’s web/desktop synchronizing product Google Gears happen ASAP. Like, now.

Until things get fixed, if you need to get contact me right away, please direct message me on Twitter. And no, the irony of that statement isn’t lost on us. Hopefully, Google won’t have to design a cute logo to remind everyone when its services are down, like Twitter’s Fail Whale. 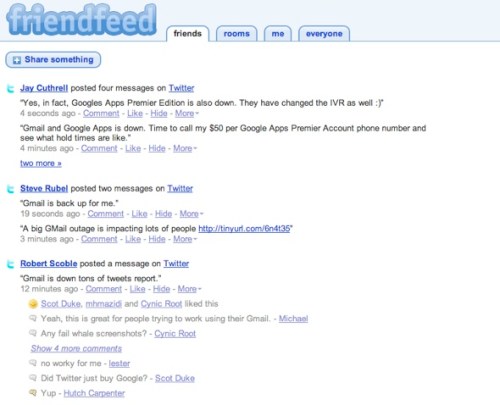 Update 1: Twitter just saved my 3pm call with a company. Gmail swallowed the phone number of the CEO I needed to contact, but luckily he sent me his number via tweet, and everything went reasonably smoothly afterwards

Meanwhile, Jay Cuthrell has a great video comment in our comments below of him on the phone with Gmail support and posted the video embedded below on 12seconds.


Google Apps Problems. I haz them. on 12seconds.tv

Update 2: My VentureBeat account is back up, as is MG Siegler’s, but I’m still hearing complaints from other staffers.

Update 3: Gmail Product Manager Todd Jackson has written a post apologizing for the downtime, noting that Googlers were affected too and saying the issue has been fixed.

In the event of future Gmail outages, you can find me on Twitter here along with fellow VentureBeat writers MG Siegler, Eric Eldon, Dean Takahashi, Chris Morrison and Dan Kaplan. Oh, and we have a VentureBeat account (for our posts) as well.