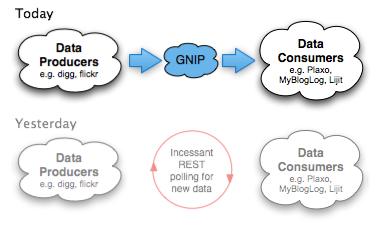 Most web users will probably never hear of Gnip, but millions will start receiving the benefits, starting today. The San Francisco-based company’s software service acts as a middleman, making it faster for any two web services to share specific, publicly available data back and forth about individual users. The result is that web sites can much more quickly display recent information that pops up on other sites.

Here’s a more detailed example of the problem Gnip (pronounced: guh-nip) is going after: Plaxo, the online address book company recently bought by Comcast, introduced a new service last year called Pulse, that aggregates your activities from other sites around the web in a single, flowing stream (as Friendfeed, SocialThing and others also do). In order to discover which Plaxo users have, say, uploaded a photo on Flickr, shared a link on del.icio.us or dugg a story on Digg, Plaxo has to keep sending automated requests to these sites to ask for updates about each Plaxo user. Because only a fraction of Plaxo users have performed an action on any one of these sites at any given moment, Plaxo ends up asking for updates about many users who haven’t done any updates — a waste of time and effort for each site involved in sharing this information.

Pulse tells Gnip which users we want updates for (e.g. which Digg users have shared their public feed of dugg stories in Pulse), and whenever any of those users digg a new story, Gnip proactively notifies Plaxo, telling us which users have new activity, all within 60 seconds! Using Gnip, Plaxo no longer has to poll with high frequency to get quick updates–in fact, not only can we poll less frequently (which helps relieve the load on both Plaxo and the publishers we’re currently hammering), but we get updates much faster than we could before. It’s a classic example of a win-win created by reducing inefficiency in the system overall.

Gnip plans to flesh out ways for sharing data between various protocols, including REST, XMPP, ATOM and others. It is also working to ease integration of the XML markup language across services, making it easier for a given service to integrate with a new site that begins sharing data.

Note for privacy advocates: Gnip only shares user data that partner sites already make publicly available, so the company isn’t at this time exposing anything that users have already designated as private.

Zooming out, Gnip has put itself into the middle of a big trend. All of the companies I’ve mentioned here have spent at least the last year or so working on ways of sharing their own user data and absorbing data from other sites. So have many others, like social networks Facebook, MySpace and others.

The end result is that the average web user will start seeing things like friends’ updates from other sites much faster than they are now. Sadly, as Dave Winer points out, beloved but technically troubled messaging service Twitter is not currently a Gnip partner — meaning the many other services that access Twitter data won’t see Gnip-powered improvements.