Forgive Otis Chandler if he still believes people read paper artifacts like books. His grandfather and namesake, after all, was the publisher of the Los Angeles Times.

But this 30-year-old Chandler knows that books are still close to our hearts because he is the co-founder, with his wife Elizabeth Chandler, of GoodReads. The Santa Monica, Calif.-based company runs a social-networking site for book lovers. Since 2006, it has added 1.3 million registered users and is growing quickly. Users are adding 100,000 books a day, with 25 million added so far.

The site is based on the idea that the opinions of real people, particularly your friends, are the best way to discover new books, not algorithmically-generated recommendations such as those from Amazon.com or Netflix. In that way, it’s not unlike 8Tracks, the music-mixing site we wrote about today.

“We started with the idea that your friends’ book reviews will be more useful to you than anything else,” Chandler said.

You can add the books you’ve read, the books you’re currently reading, and the ones you want to read. The site’s success, in an age of web reading, is an interesting piece of evidence in the debate about whether people read any more. (For a fascinating exploration of this topic, read the recent New York Times story on it). The smart idea behind GoodReads is that it turns offline book reading into a social online activity. The irony of a Chandler family descendant moving online marks the generational change happening in society. 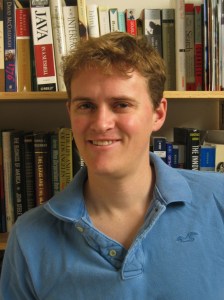 “There are a lot more readers out there than we give credit for,” Chandler said. “It’s a solitary activity. We don’t talk about it a lot, like we do about movies or ‘American idol.’ But more people read than you think and it can be a more social and fun experience. Meeting people with the passion for reading has encouraged me to make a business out of it. ”

One of the main features of the site is the Netflix-like ratings system. It really is quite addictive. I joined it about a month ago and quickly perused all of the lists available. I rated each of the books I had read. Soon enough, I had 532 books rated. (I was an English major, you know, and I happened to keep a list of the books that I read anyway, for fun.) Chandler says that puts me in the 10 percent minority of readers who rate more than 100 books.

“You’re one of the crazy people,” he says. “The attraction for everybody is that rating your books is like a walk down memory lane.”

The appeal is not necessarily about bragging rights on who reads the most books, although I’m sure that notion adds to the idea of fun for some people. I find that it’s a good way to get to know friends better. Some of the structure could be better. The system could, for instance, do a better job of recommending people who share the most in common with you, in terms of taste in books.

The rating system allows GoodReads to come up with a lot of statistical features, like “popular,” “most read,” and the ignominious “unpopular” features. A new feature, “listopia,” shows the lists that have been rated highly by other readers, such as “best books of our lifetime” or “unforgettable characters.” You can see the book covers for each title, but most of the site is plain text.

One of the most interesting things about GoodReads is what it tells us about what we read. It’s no surprise to find the last Harry Potter novel and “The Da Vinci Code” at the top of the charts. But it is heartening to see that readers haven’t forgotten about titles such as “1984” and “Slaughterhouse Five.” I’m appalled that “The Red Badge of Courage” shows up on the unpopular list and I’m amused that “Dianetics” by L. Ron Hubbard shows up as one of the worst titles of all time.

It’s actually not the end of the world that our relationship to books is changing. I’m definitely not reading as much as I used to. But GoodReads isn’t trying to hold back the forces that are causing such changes in behavior. And in the age of the Internet, book reading can sit alongside other passions of the current generation, such as reading and writing fan fiction, Chandler said. Fan fiction is something that GoodReads may add. Already, a lot of people are posting their own poetry, under the “writing” section of the “explore” tab on the site.

Book marketers should also take note. A decade ago, a book was an instant bestseller if it got reviewed in the New York Times book review. That’s not the case anymore. Bookstore managers can look at GoodReads to find out what people are reading, beyond the bestsellers.

Just as MySpace is used for marketing new bands, authors can create their own profiles on GoodReads and interact with fans. After all, Chandler said, 300,000 books get published every year and only 2 percent or so get noticed. Authors can even consult with readers about writing their current works, putting out ideas for vetting in an “open source” style.

It is funny that this young Chandler fellow should know more about our reading habits than, say, the Library of Congress. Chandler, a programmer, worked at the San Francisco dotcom, Tickle.com, which was sold to Monster in 2004. He stayed until 2006 and learned how to run a social media site. Then he went off on his own, moving to Santa Monica to “follow a girl.” (Their wedding was a month ago.) Together, they launched the site in 2006. Chandler worked alone on the site for all of 2007, while his wife handled PR and editorial work. Now the company has two additional employees and a number of contractors.

The site is in English, but there are customers from every country in the world. Iran, for instance, is one of the hottest-growing sources of new visitors. You can upload your data to Facebook as well. Facebook now accounts for 5 percent to 10 percent of GoodReads’ traffic.

The company can make money through ads, affiliate sales programs with booksellers, and other ways. Competitors include Shelfari, which is more like a book-reader’s widget, and LibraryThing, for hardcore literary types. LibraryThing catalogs your books, and is free for up to 200 books. After that, it charges $10 a year. Goodreads has more traffic than both of those sites, according to Compete.com.

So far, the company has raised a round of angel funding from James Currier, founder of Ooga Labs and Chandler’s former employer, Tickle; Mike Jones, founder of Userplane; True Ventures; and Stan Chunovsky. Chandler said he may seek a new round next year.

What happens if book reading starts to decline? Newspaper reading has certainly fallen off, as evidenced by the sale of the Chandlers’ Times Mirror Co. to Tribune Co. and its subsequent sale, including the Los Angeles Times, to billionaire Sam Zell last year. Online is where this Chandler wants to be.

“Telling a story is never going to go away,” Chandler said. “The future of reading will be very bright.”