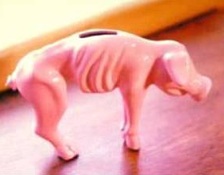 When Google invested $1 billion in AOL back in 2005, the move was met with mixed reaction. On one hand, the fast growing Internet giant was basically blocking Microsoft from taking away one of its larger online ad and search deals. On the other hand, it was AOL; an empire built on dial-up Internet in a world quickly completing the transition to broadband.

Turns out those in the latter camp may have been right, as Google acknowledged today.

In a quarterly report filed with the SEC, Google admitted that its five percent stake in AOL as a result of the $1 billion deal “may be impaired,” the AP reports. Basically, that means that Google is acknowledging that AOL is worth significantly less now than the $20 billion market value its investment implied. Unless AOL turns things around, Google will have to take an impairment charge on the investment, as Silicon Alley Insider notes.

But what’s interesting is that Google apparently thinks AOL will be able to turn things around and get back up at least to that $20 billion valuation. So it’s not ready to acknowledge that impairment just yet.

Why Google believes a turnaround of that proportion will happen isn’t entirely clear. In fact, it may have never thought AOL was worth $20 billion to begin with, it was simply a defensive investment, as PaidContent, I think, correctly notes.

Maybe Google thinks Microsoft or Yahoo will be quick to make a move to buy up AOL’s Internet operations, thus bolstering the investment. (AOL parent Time Warner recently announced it would spin off AOL’s dial-up business from the rest of the company — and is likely trying to sell both.) Or maybe Google just doesn’t want to eat the costs at this time. Or maybe it’s thinking about buying AOL at a premium just to avoid the fees.

Okay, that last one is a joke. Any charges Google is assessed for the bad investment would likely be relatively insignificant for the company. Still, any time a company is being looked at for purchase by Yahoo and Microsoft, you have to throw Google’s name into the ring as well — especially when it already owns five percent of that company.