As part of the search ad deal signed last week, Google and Yahoo announced they would make their instant messenging service, Google Talk and Yahoo Messenger, interoperable. Knowing that it took Gtalk and AOL Instant Messenger (AIM) a couple of years to link up after plans were initially announced, I wasn’t optimistic for this functionality anytime soon. But some interesting screenshots may have changed my mind.

Google lays out the history of Gmail chat in pictures, in a post on the Official Gmail Blog today. One of these pictures (seen below) is particularly interesting because it appears to show the smiley face emoticon associated with Yahoo Messenger. 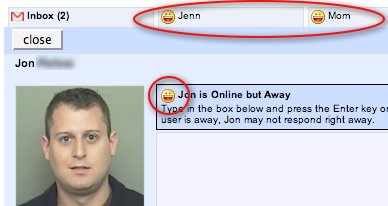 The emoticons Google uses are different. As are the ones AIM and others use. It’s pretty clear from the image at the top of the story that this is the Yahoo emoticon.

Perhaps even more interesting is that Google states that these screenshots are from “a couple of the early ideas we tried out.” Just how long has Google been close to integrating Yahoo Messenger? Was Yahoo “cheating” on IM partner and Google rival, Microsoft (the two signed an IM deal in 2006), well before the two sides’ recent search ad deal?