Who won tonight’s presidential debate? That depends on who you ask.

Judging by popularity points and #engagement attributed to each candidate, there was a clear winner tonight, according to Google and Facebook data. That winner? Bernie Sanders.

A Facebook-endorsed poll published by CNN ranks Sanders in the top 80 percent of Democratic candidates at the time of writing. 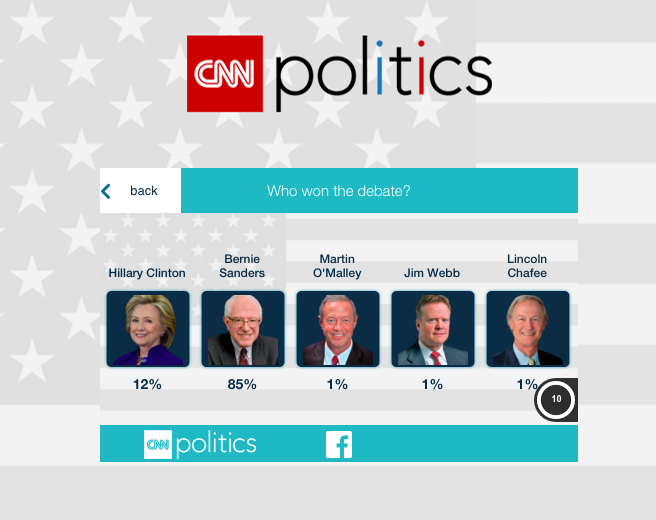 Third-party Facebook data appears to reinforce the above verdict.

How the #DemDebate changed ranks tonight, minute by minutehttp://t.co/eoamxu82rr pic.twitter.com/77mHK4LFPk

Google Trends ranks Sanders as the “top searched democratic candidate” of the night. However, third-party Twitter data via Topsy seems to suggest a marginal win by Hillary (in both tweet volume and sentiment), at the time of writing.

Let’s address the donkey in the room.

These stats matter. The data reflects the popularity of candidates among CNN-viewing Facebook, Twitter, and Google users this evening — but don’t gamble on it. There’s no way for this sort of social analysis to anticipate the future blunders and memes closely watched candidates will bless us with as the debates roll on.

And, of course, the data excludes folks who ignored Facebook, Google, and Twitter entirely tonight. Surely a few isolated individuals opted to ditch their second screen in order to shout at their TV in peace, right?