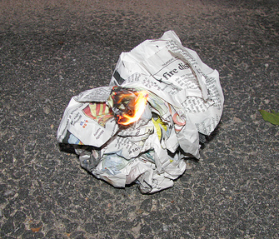 As the situation for the industry continues to get more dire, Google has announced today that it is pulling out of the print media advertising business. “While we hoped that Print Ads would create a new revenue stream for newspapers and produce more relevant advertising for consumers, the product has not created the impact that we — or our partners — wanted,” Spencer Spinnell, Google’s director of print ads wrote in a Google blog post today.

The project, which launched in 2006, had the intention of translating the success Google has had with relevant online advertising to the print media world. While the program launched with 50 newspaper partners, and quickly expanded to include over 800 partners, the current tough economic climate and the continuing shift from print media to online media no doubt played a roll in Google’s decision.

In its post, Google makes it clear that it wants to continue to help publishers monetize their content — as long as they make it available online. And that may be something that some newspapers take Google up on, as more and more are now shuttering their print operations and moving to an online-only format. Online advertising’s outlook isn’t exactly rosy either in the current climate, but one has to imagine that as the economy improves, there will be plenty of room for growth.

Google will announce its quarterly earnings this Thursday. You can bet that advertising will be the focal point, and this death of the print advertising experiment will be spun as a way to focus more on perfecting their online advertising efforts.