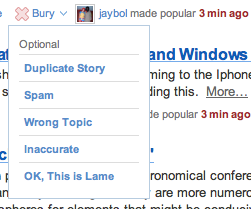 The term sheet was signed and final negotiations were underway, but some due diligence cause Google to walk away from its deal to buy Digg, reports TechCrunch. Thus ends another round of rumors that the social news voting site is being bought.

On Digg, users have the option to “bury” a story (basically vote it down) and give a reason for doing so. It appears Google has done the same to this entire deal, but the question is, was it marked as “Inaccurate,” “Wrong Topic,” “Spam,” or “OK, This Is Lame” (the options for burying on Digg)? Or just maybe it was marked as “Duplicate Story” (a “dupe”) since we’ve all seen this story quite a few times before.

If the details are to be believed, a Digg sale was closer than it ever had been to happening. The deal, thought to be in the $200 million range, apparently derailed when Google wasn’t sure if Digg’s key technical team was a good fit for what Google wanted to do with Digg. There had been a lot of talk that Google would use Digg’s technology to revamp its Google News product — something which we weren’t sure made a lot of sense given how successful AOL and particularly Yahoo have been at building their own social news sites with Propeller (formerly Netscape) and Yahoo Buzz respectively.

The end of this deal also appears to save the Microsoft/Digg advertising pact. Microsoft and Google have battled numerous times in the advertising sphere, most recently when Microsoft failed to buy Yahoo’s search business (and the company itself) and Google stepped in with its own search advertising deal with Yahoo. Previously, the two had also battled over a deal with Facebook as well. A battle which Microsoft ended up winning and just recently extended to include search functionality and an increased role in advertising. 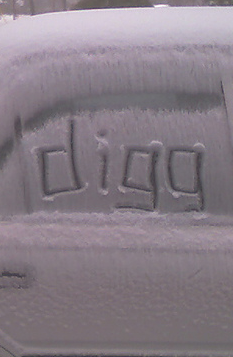 Given its advertising deal with the company and its new strategy to make waves in the online world, certainly a Microsoft purchase of Digg isn’t out of the question. There have been other suitors of Digg in the past such as Al Gore’s CurrentTV, something which journalist Sarah Lacy detailed in her recent book, Once You’re Lucky, Twice You’re Good.

For now however, Digg may be content to raise a new large round of financing, TechCrunch indicates. The company does have the bank Allen & Co. at its disposal after all after hiring them late last year to pursue a sale. At that time, Digg was thought to be looking for a sale in the $300 million range.

The company also announced at a meetup in Chicago that it would be rolling out a new functionality to allow Digg users to create their own “sub-Diggs” to make the service more diverse and robust. This service is expected sometime in the next 6 months.