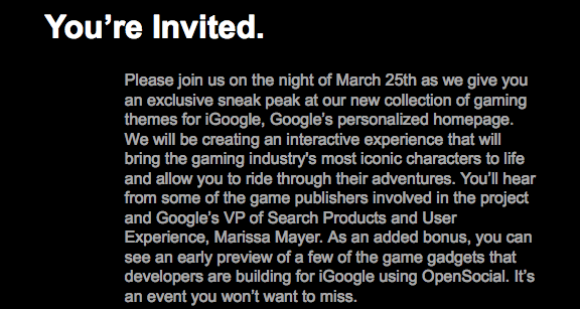 Apple is a fan of sending out last-minute press invites to special events when it has a product to launch. Google, on the other hand, tends to roll things out more quietly, opting for a blog post or press release. But it’s apparently starting to favor the event strategy more and more.

Today, we received an invite to a special sneak peak of an upcoming feature for its iGoogle homepage. But oddly, it doesn’t appear it will be a huge overhaul. Instead, the focus is apparently on a new collection of gaming themes for the site.

Granted, the event, which will be on March 25, falls in the middle of the Game Developers Conference (GDC) in San Francisco, so Google obviously wanted to do something for the large gaming community that will be in town. But that focus for such an event seems pretty weak. It’s the “added bonus” element that sounds much more interesting:

As an added bonus, you can see an early preview of a few of the game gadgets that developers are building for iGoogle using OpenSocial.

Given that Facebook used the SXSW conference this week to unveil its Facebook Connect for the iPhone, with an emphasis on games, it shouldn’t be a surprise that Google pulled that out. It’s just a surprise that it’s not the focus of the event.

Maybe they should talk to Apple’s marketing team.

Update: As commenter Luke notes below, Google also misspelled “peek” in “sneak peak” in its invite.

If you’re in town for GDC and are interesting in another gaming related event, check out VentureBeat’s GamesBeat conference on March 24.