Google Hangouts has received a small but important backend upgrade: peer-to-peer (p2p) connections. Google confirmed to VentureBeat that the functionality started rolling out to all users this week.

Reddit user kxra first spotted the addition in their Hangouts for Android app yesterday. We reached out to Google to gauge what exactly the feature meant for users.

“To improve call quality and speed, Hangouts will route audio and video over a peer-to-peer connection when possible,” a Google spokesperson told VentureBeat. The “when possible” part is key — Hangouts won’t be using p2p every single time. To be clear, Google confirmed that Hangouts is getting peer-to-peer functionality on all platforms (Android, iOS, and web), not just Android. 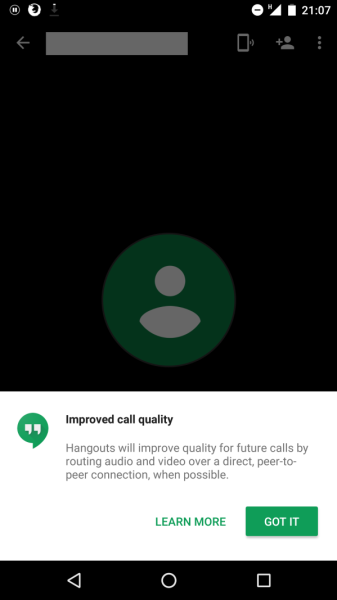 A Hangouts Help support document explains that peer-to-peer connections allow Hangouts “to more efficiently route your call directly to the person you’re talking to, rather than connecting the call through one of Google’s servers.” Think of it like letting Hangouts know where you’re located so that it connect you more efficiently:

A direct peer-to-peer connection between you and the other person reveals both your IP addresses. With an IP address, it’s possible to approximate your location.

This is great news for anyone who has ever been frustrated with the call quality on Google Hangouts (oh god, don’t even get me started). Some, however, may be concerned that their IP address will be exposed. The good news is that there doesn’t seem to be a way to show someone’s IP addresses in the Hangouts user interface.

Skype, which originally used p2p connections, just last month finally started hiding IP addresses by default. For years, if someone wanted to attack or harass you online, all they had to do was figure out your Skype name and follow one of the countless guides to get your IP address. Once a malicious party had your IP address, they could perform a denial-of-service (DDoS) attack, a common method for taking down a device by overloading it with requests. This was particularly frustrating for Skype users playing games online, and doubly so for those trying to stream their gaming session.

We doubt Hangouts will result in similar problems, but Google has likely taken the possibility into consideration.