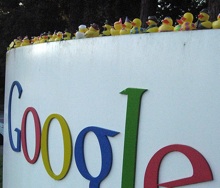 The month is drawing to an end, which can only mean one thing: Time to argue about various reports on Google’s performance. So far we have one good and one bad. Let’s dive in.

First, the bad. Google had another flat month in terms of paid click growth in February, according to Silicon Alley Insider (which received the comScore data early from a source). The month looks like it saw a 3 percent increase in the clicks year-over-year, but because this is a leap year, you can actually knock that number down to 0 percent growth — same as last month. This looks bad because previous months leading up to January had all seen double digit growth (though it was declining).

As happened last month, Google stock is getting slammed right now, down over 3 percent in after-hours trading. The thought is that Wall Street was hoping for a 5 to 7 percent growth in paid clicks this month.

It’s time to question once again just what this actually means — if anything. After all, following last month’s report people were using words like “disaster” in association with the figures, only to have others come back a few days later to explain that the decline in paid clicks is actually a part of Google’s longer term plans. You see, Google took steps to make sure that less accidental clicks took place on its advertisements, this in turn led to a rise in relevant ads and more importantly, revenue-per-click (our coverage).

At the time, we wrote:

So at least some people out there were expecting today’s results.

Things get even more interesting when you consider the positive report that came out today as well. Last month, Google was once again able to improve its share of the U.S. search market. The search engine accounted for 58.7 percent of searches compared to 56.9 percent in January according to the new numbers from Nielsen (as reported by CNET). These numbers mirror the recently reported comScore numbers for last month, released last week.

So, on one hand Google’s dominance continues to grow, but on the other the company may be stagnating. It’s just another month for Larry and Sergey (be sure to check out our coverage of their “hardships” this past year as well).