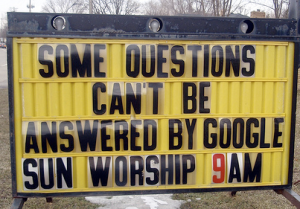 A Google regulatory filing obtained by The Associate Press last week was rather odd because we knew that Google was letting go of at least some of its contractors (as they put it, not renewing their contracts), but the filing seemed to go to great lengths to skirt around the actual numbers of just how many were being let go. Today, Google has clarified those numbers a bit more, and more importantly, has confirmed actual layoffs for the first time. Well, kind of.

Google has eliminated “almost all” of its contracts with external contractors and vendors providing recruiting services for Google, according to a post on the Official Google Blog. But the big news is that Google is also letting go of approximately 100 recruiters since the company has scaled back its hiring efforts in the down economy.

But the post goes on to say that, “we hope that many of them will be able to find new roles at Google.” This seems to be Google’s modus operandi of late — say they are laying people off, but then leave a caveat at the end that they could remain with the company. Or it’s not a layoff, just a failure to renew a contract. Regardless of what Google wants to call it, neither of these would happen in a good economy, and neither are a good sign.

And these cuts are especially strange for Google. During the last dotcom bust, Google kept right on hiring, even as the companies around them was cutting people left and right, as Valleywag’s Owen Thomas notes. But Google was a fraction of the size it is now back then, and it now is a public company that must answer to its shareholders who have watched the company’s stock plummet from $750-a-share levels down to $300-a-share levels.

Last week, while some were taking the numbers in Google’s regulatory filing to mean that it had cut nearly 6,000 temporary workers, Google told me those numbers were way off — that the 4,300 temp workers listed in the filing were just a subset of the 10,000 that Google co-founder Sergey Brin mentioned the company had just months earlier.

When I asked if there were more specific numbers today for the group in which “almost all” were let go from, I was told, “I think the language in the blog post is clear: ‘external contractors and vendors providing recruiting services for Google.'” So basically, no comment — but we can probably still safely assume it’s less than the 10,000 overall contractors.

In a separate post on the Google Blog, the company also noted that it is closing three of its offices, in Austin, Texas; Trondheim, Norway; and Lulea, Sweden. But just as when it closed its Phoenix office last year, Google is hoping to reassign the engineers working in those offices to other branches. But the company acknowledges that not all of the employees will want/be able to move. So yes, that’s more employees that will be reduced without officially calling it a layoff.