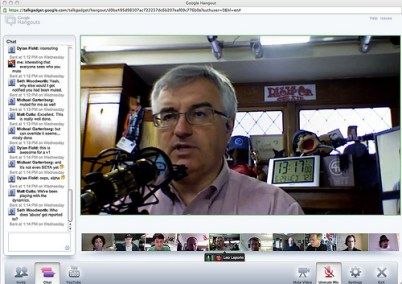 Google says it will eventually open up the group video chat in Google+ to third parties.

That means anyone will be able to utilize the group chat, called Hangouts, in their apps or services, according to Google Realtime Communications lead Justin Uberti.

Uberti says that Google “plans to publish the specifications needed to inter-operate with Hangouts,” though it will likely be some time before that actually happens. When the specs are eventually released, Hangouts will have yet another unique feature to lord over competitors like Skype, which Microsoft plans to acquire.

At the moment, Hangouts allows Google+ members to participate in free 10-person video chats. Skype, on the other hand, charges extra for group video conferencing. Skype also doesn’t have an easy way for third parties to implement its video chat service. Thanks to the comparison with Hangouts, Skype is looking more and more like Facebook’s closed ecosystem. Ironically enough, Facebook itself may announce Skype-powered video chat tomorrow.

I’m a big fan of Hangouts, perhaps because it’s one of the most singularly unique features of Google+. The company hasn’t announced any plans for Hangouts on mobile devices yet, but you know it’s going to happen. By opening up the feature to third parties, Google also opens up the door to other companies to create Hangout apps, potentially even before its official app comes out. Google may also be crafting Hangouts as a killer feature exclusive to Google+ that attracts users, before it turns around and markets it as the de facto way for anyone to implement video chat.

Via GigaOm; screenshot via Eddie Codel