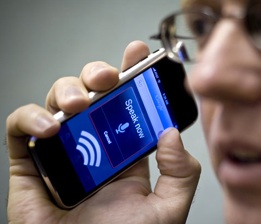 As soon as tomorrow there may be a cool new application in Apple’s App Store from Google: Voice search. The app will apparently allow users to speak commands such as “Where’s the nearest Starbucks” into the iPhone and it will be sent to Google’s servers and come back with a search result, according to The New York Times.

Results are apparently shown within seconds and apparently will include local information if you choose to allow the app to send your GPS data to Google.

As the NYT article notes, both Yahoo and Microsoft also have voice search features available for various cellphones, but Google’s offering apparently is much more accurate — really the only thing that matters in search.

Not surprisingly, Google is apparently using some of the data it collected from its GOOG-411 free directory service to perfect its new voice search technology.

“I’ve been using it [the app] tons and consider it amazing. I think it will be pretty big”

Eventually the free voice search service will roll out to other phones beyond the iPhone, but users of Apple’s hot device will get the first crack at testing it out. Again, another sign of the good relationship between the two, despite earlier rumors that Apple is working on its own search engine (which probably isn’t what it seems).

I’ll wait to say anything else until I actually try out the app, which as I said above, could be out tomorrow. Apparently it’s already been submitted to the App Store and Apple just has to approve it, which you can be sure they will. It’s not clear from the NYT article if it’s a completely new app or just an update to the Google search app, which while somewhat nice, is kind of pointless and goes unused on my iPhone.