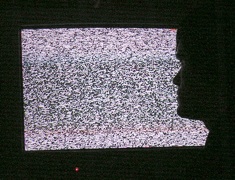 With the 700 Mhz spectrum auction settled and Google having gotten what it wanted (even in not winning) — an open spectrum (our coverage) — the company now sets its sights on a new frontier: your television’s “white space.” “White space” is the term used to describe unused television broadcast channels — you may have never realized there were any unless you’ve had a television with an old-school manual dial. Google wants to use this space to create “Wi-Fi on steroids,” as Richard Whitt, Google’s telecommuncations counsel, spelled out in a conference call on Monday.

Google petitioned the FCC on Friday to allow it to use this white space, which will be available when the government forces television providers to switch its systems over to the new digital standards in early 2009. This white space has the bandwidth to send and receive data many times faster than current Wi-Fi technology allows for.

Google has clearly been thinking about this idea for a while. In its plans, the company has laid out a full layer of security to ensure that any way it uses the white space will not interfere with other devices using the same bandwidth. Such a move may help get the National Association of Broadcasters (NAB) on board, as GigaOM notes. NAB had been very much against using the white space for broadband Internet purposes.

While testifying before Congress a few weeks ago, Bill Gates laid out similar hopes for an opening of this white space. In fact, Microsoft is one of the founding members of the White Space Coalition (Google is also a member, as are Dell, HP and others) and feels that the spectrum’s opening is imperative to maintaining a competitive balance for the state of Wi-Fi in this country. Gates realizes that using the white space will not only allow for the potential of much faster broadband speeds — but could also connect people who live in remote areas in a way that today’s Wi-Fi never could.

With this FCC petition, Google is once again showing its commitment to changing old practices in various industries (mobile and television broadcasting). If the 700 Mhz spectrum auction was any indication, it’ll get its way, even if it does so by unconventional means.