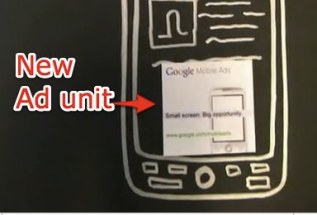 It’s a way for advertisers to places ads beside content that is browsed on smartphones, a move that further highlights the search engine giant’s strategy for mobile: It wants to target high-end mobile users.

It’s also significant in that it makes development of applications and content for smartphones so much more appealing.

The offering is basically a mobile version of Google’s AdSense product for desktop computeres (see video below for explanation). It places a large AdSense ad unit on the mobile content site, so that it is highly visible.

This product only displays ads on mobile sites being browsed by high-end mobile phones such as the iPhone, Palm Pre or Android-based phones.

It’s just the latest way Google intends to target smartphones that have browsers featuring full Web pages (those based on HTML). These sorts of pages are high-quality enough that users can easily make an ecommerce purchase from start to finish just as they would on their PC. Most basic phones today have so-called WAP browsers, which don’t allow this and don’t allow things like tracking or analytics.

Google has been conspicuously muted in its offerings of mobile advertising for basic phones. It has stood by and let companies like Admob and other advertising start-ups offer ad networks for low-end phones. It’s clearer than ever that Google’s strategy is to go after “high-end” phone users.

It also comes at a time when we’re hearing Google is about to launch a bunch of new Android-based phones by the end of the year, including for circulation in the U.S. Already, Google advertisers could reach iPhone users with search ads and from within iPhone applications. In a phone call a couple of weeks ago, a Google spokesman told us: “People are 50 times more likely to use Google search on the iPhone than on a WAP device.”

Google just blogged about its new product here. And here’s Google’s statement for publishers already using Adsense for content on the web. Publishers simply place a snippet of javascript code on their site. They can also choose to not have their ads run on mobile phones.

Google’s strategy is significant in other ways. Mobile developers who create mobile applications and content for smartphones get an additional incentive to do so: The new AdSense ads are likely to perform better. This, in turn, will pump more Google advertising dollars into the smartphone developer ecosytem now dominated by Apple, the Open Handset Alliance supported by Google and Palm. In other words, despite the competition and tension often displayed between Apple, Google and Palm (employee poaching, recriminations over things like Google Voice), there’s also a little love-triangle forming here too. Ha, sounds like any standard relationship!

Google also told us that it is aware of various instances, for example when people are doing travel or job searches, where mobile searches have higher conversion rates than desktop ones.