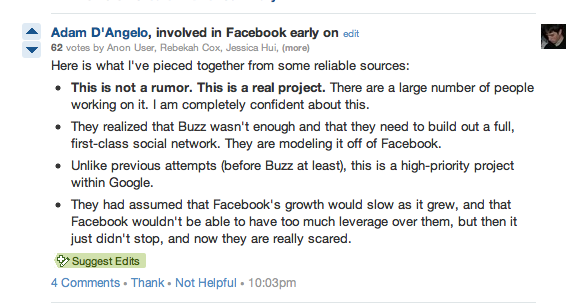 Facebook’s first chief technology officer and Quora co-founder Adam D’Angelo said on the question-and answer service last night that Google is building out a “full, first-class social network” in order to keep Facebook at bay. This comes on top of Digg founder Kevin Rose’s tweet over the weekend mentioning the rumored project.

“They had assumed that Facebook’s growth would slow as it grew, and that Facebook wouldn’t be able to have too much leverage over them, but then it just didn’t stop and now they are scared,” D’Angelo said.

Indeed, following Facebook’s developer conference in April, when it launched the Open Graph and an ambitious vision to map the entire web through people, Google’s leadership was “not amused,” according to one source. The company’s co-founders have also started tapping younger product managers and associate product managers for ideas on how to build compelling social products and features.

The problem is Facebook has essentially set itself up to build a Web-wide brand advertising network with more than one million sites integrated into its platform (although it has never said this explicitly). Secondly, the open graph metadata and the “liking” behavior of its roughly 500 million users will allow it to index the web for a unique search offering. Facebook could marry its “like” graph with the link graph Google has indexed for years to make a rich and very personalized version of search. This is a much longer-term play, however.

For years, social networking wasn’t a high priority at Google internally. While the company had supported Orkut and various socially-flavored products like Google Reader, social networking was not perceived as a serious academic or intellectual problem akin to some of the infrastructure and technical Google faced with search. Google had the ability to buy earlier social, Web 2.0 companies like Flickr, but declined because its leadership believed that the company could have easily built these services in-house and didn’t see the value-add. (For our overview of Google’s social strategy, click here.)

This attitude has changed within the last two years. As Facebook has grown, it has become apparent that the social network has the ability to devour Google’s market share in display advertising. Not only that, it could one day go after Google’s bread and butter, the search keyword advertising market, if it builds a compelling alternative.

So Google put its efforts into products like Buzz, its much-vaunted social networking layer in Gmail launched earlier this year, and it bought Aardvark, a social search service founded by former Googlers. The problem was, privacy issues aside, Buzz didn’t really address an unmet need among consumers. There were already alternatives with strong network effects like Facebook and Twitter.

If this new project, reportedly called “Google Me,” is going to make any headway for the company, a copycat “full, first-class social network” probably isn’t going to cut it either.