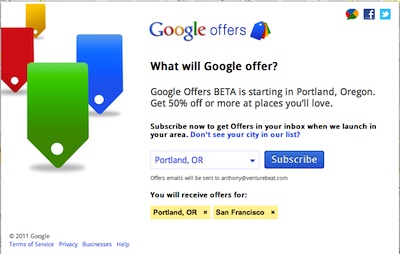 It looks like Google is about to launch the Google Offers deals service that was first revealed in January.

The company has put up a page where people can sign up to receive deals that offer 50 percent off or more at local businesses. The Help page says the program is technically still in beta testing (Google loves to keep products in beta) and will start out in Portland, Ore. before expanding to the New York and San Francisco areas.

As for the timing, the Offers help page says: “We’re working hard to get Google Offers up and running in Portland”, that the emails will start arriving “soon”, and that it will add other cities in “the near future.”

When Google started recruiting businesses in January, the Offers program seemed to be pretty closely modeled on Groupon, with deals written up by Googlers and delivered via email — not surprising, since Google previously tried and failed to acquire the group-buying giant for a reported $6 billion. Unlike Groupon, Google’s offers won’t require that a certain number of buyers sign up before they become active.

There isn’t much information available on the help page, and Google said it’s too early to release details about how the deals will work, so I’m not sure whether those details are still accurate. But it’s clear that Google Offers is still email-centric.