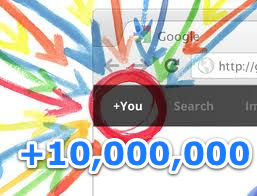 Google+, the new social network from Google, will reach 10 million users today, according to a rather unorthodox study conducted by Paul Allen of Ancestry.com.

The study is based on U.S. Census data about surname-popularity (the popularity of a person’s last name) and the number of Google+ users with each surname.

Allen explained in a Google+ note that his model for gathering the total number of users is simple:

Allen said he doesn’t claim his process has perfect accuracy, but he does think the model is sound.

According to the analysis, Google+ has approximately 9.5 million users worldwide, with 2.2 million joining in the past 32 to 34 hours. The service could reach 20 million user over the weekend if Google keeps the Invite Button available, Allen said.

Since the data was obtained by a third-party source, it isn’t an official count of Google+ users. The company hasn’t released any public metrics around the number of people who have signed up for Google+. A Google spokesperson declined to comment about the accuracy of Allen’s information.

However, if the information is accurate, it means Google+ is one of the fastest-growing social networks, ever.

The company launched Google+ June 28 in response to the massive popularity of Facebook. The service aims to turn all of Google’s products into one giant social platform.