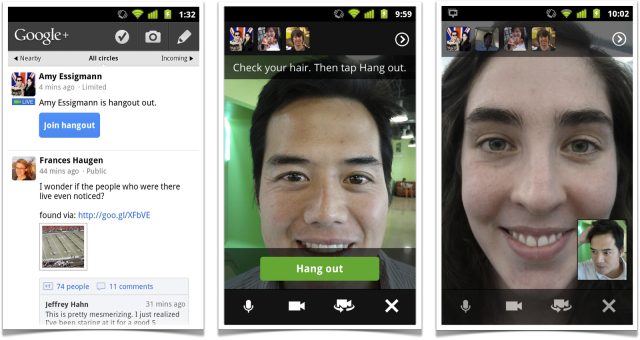 Google just unveiled a boatload of new features for its fledgling Google+ social network, many of which will be sure to please fans of its Hangouts group video chat.

First off, Google+ Hangouts is now available on Android phones via an update today. You can also broadcast Hangouts sessions to the world via a new On Air feature, and collaborate with others during Hangouts by sharing your screen and working together on Google Docs or Sketchpad. Google is also renaming its Huddles group chat feature on mobile devices to Messenger (yes, that sounds familiar).

Notably, Google+ is also opening up for anyone to join today without the need for an invite. The move comes after Google+ has been in field testing for 90 days. Google says it has added over 91 features to Google+ during its field test, and with its announcements today that number has jumped to 107 new features.

Google has also finally added search capabilities to Google+. Typing in queries to the Google+ search box will get you relevant people and posts from within the social network, as well as popular content from around the net. “If you’re into photography, for example, then you’ll see other enthusiasts and lots of great pictures,” writes Google’s head of social Vic Gundotra. “… In all cases, Google+ search results include items that only you can see, so family updates are just as easy to find as international news.”

Google says Hangouts on mobile only supports Android 2.3 devices and up with front-facing cameras, which includes the Nexus S. iOS support is “coming soon.” The company has also announced an API for Hangouts, which will let developers tap into Google’s group video chat tool. “It enables you to add your own experiences to Hangouts and instantly build real-time applications, just like our first application, the built-in YouTube player,” Hangouts platform lead Richard Dunn wrote in a blog post.

The company also announced a handful of updates that will make the Google+ mobile experience better. SMS support has been improved, allowing users in the US and India to send and receive messages, as well as respond to group messages, via texts. Google+ on mobile also now lets you easily mention users in posts and comments, and you can easily +1 comments in the iOS  app (Android will be getting this soon).

In addition to changing Huddle’s name to Messenger (a wise move, since Huddle was somewhat abstract), the group messaging app now supports photo sharing. That should serve to make Google’s Messenger more competitive against other group messaging apps from Facebook and Kik.