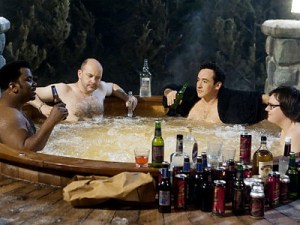 Despite many reports to the contrary, about 33.6 percent of Google+’s total user base is female, according to new research by unofficial Google+ statistician and founder of Ancestry.com Paul Allen.

Allen, who earlier in the week accurately predicted that Google+ had surpassed 10 million registered members, determined his gender estimates using a method of analysis that is based on U.S. Census data about surname-popularity (the popularity of a person’s last name) and the number of Google+ users with each surname.

“The poster of 18 men in a hot tub that has been passed around for the past week or two is not reflective of reality and is not what Google+ is going to end up being,” Allen wrote in a recent note on Google+.

Other popular social networks, by comparison, are mostly dominated by women, according to a Pew report on social networking sites. The Pew data shows that females account for over half of all users on Myspace, Facebook, Twitter and a collection of other less popular social sites (see bar graph image). The data has a 2-3 percent margin of error.

The only social network with a male dominated user base is LinkedIn, according to the Pew data. However, Allen expects Google+’s female population percentage to surpass LinkedIn’s (which is 37 percent female) in early August 2011.

Allen admits that he ignores the small percentage of people who decline to identify their gender on Google+ when determining his data. Still, his research method has, thus far, proved accurate.