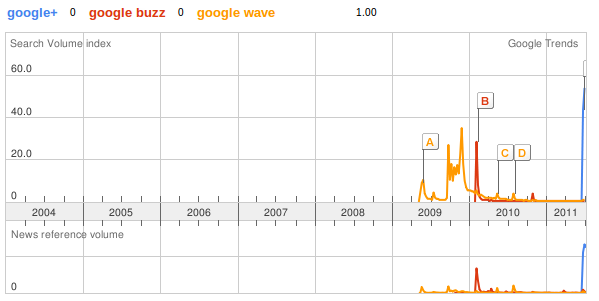 Google+, the social network Google launched three weeks ago, is off to a much stronger start than the company’s failed Wave and Buzz offerings, according to a Google Trend comparison of the services built from an analysis of search trends.

“It’s early yet, so I don’t think that Google+ has ‘peaked’ in terms of news or search by any means (if it’s successful),” writes Discovery’s Razib Khan, who first reported on the data. “But it’s already surpassed [Google’s earlier] two offerings.”

The news isn’t exactly shocking, given just how much Google+ has been dominating the headlines since launch. But it’s still interesting to see just how much better Plus is doing in comparison to Buzz, which was encumbered by privacy concerns, and Wave, which was cancelled after neither Google nor mainstream users found any purpose for it.

Judging from the data, Wave peaked when it launched in mid-2009 and Buzz peaked after its launch in early 2010 (though Khan points out that much of Buzz’s early publicity was negative). Google+, on the other hand, appears to be well over two times as popular as its predecessors, and interest in the new social network doesn’t seem to be slowing down.

There’s also more than just trend data that shows Google+ is a smashing success. Google CEO Larry Page confirmed that Plus had surpassed 10 million users during Google’s Q2 earnings call last week, and IdeaLab CEO Bill Gross predicted that it will likely be the fastest service ever to reach 100 million users (I concur).

After using Google+ heavily over the past few weeks, I think it’s clear Google has learned a lot from its failures with Buzz and Wave. The company opted to make everything about Google+ opt-in — from activating the service, to adding friends — so users won’t be surprised to find a new service in their inbox like they were with Buzz. And unlike Wave, it’s much clearer what Plus is offering to users (and even if you don’t quite get it, you can still use it to share pictures and do group video chats).