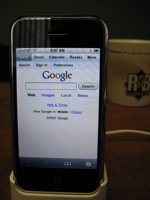 Just because Google will soon release its mobile operating system Android, it’s not ignoring the iPhone. In fact, the online ad giant is preparing to offer advertisers a way to tailor ads for iPhone users, according to Adweek.

For example, a normal American Airline web ad would offer a link to American’s site where users could buy tickets. An iPhone-specific ad might let you call American with just the push of a button or take you to an iPhone-customized site.

In its article, Adweek cites unidentified ad agency executives who have been briefed on Google’s plans. Google itself hasn’t confirmed the report. This seems to match what we’re hearing about Google’s warming attitude towards the iPhone. For example, we’ve been told about a noticeable shift of tone in presentations given by Android’s Rich Miner, away from a generally competitive stance to one that’s closer to, “We’re all in this together.” (Not that Google was ever particularly hostile. The first iPhone app I downloaded was Google’s.)

That attitude makes sense, given that the iPhone really offers some rich advertising opportunities, and 10 million of them have been sold so far.

The question now is, what kind of functionality will Google and its advertisers come up with, and how will it stack up against iPhone-specific features offered by ad networks AdMob and JumpTap.