Google has pulled popular video app TikTok from the Play Store in India following a local court’s direction, stoking fear among some activists that this could set a dangerous precedent. Apple, which has also been ordered by the government to pull the app from its app store (App Store), plans to comply with the order later this week, a person familiar with the matter said. Google and Apple declined to comment. TikTok, which has amassed over 120 million monthly active users in India, did not immediately respond to a request for comment.

TikTok, operated by Chinese conglomerate Bytedance, has come under hot water in India in recent weeks after some users complained about inappropriate content, including pornography, on the video service. A high court in Southern state of Tamil Nadu urged the central government to ban the download of TikTok in India earlier this month, alleging that TikTok “encouraged pornography” and risked spoiling the “future of the youngsters and mindset of the children.”

Bytedance challenged the state court’s order in India’s apex Supreme Court last week, asserting that such a move would undermine freedom of speech in the nation. The Supreme Court referred the case back to the state court on Tuesday, thereby rejecting Bytedance’s appeal to call off the ban. 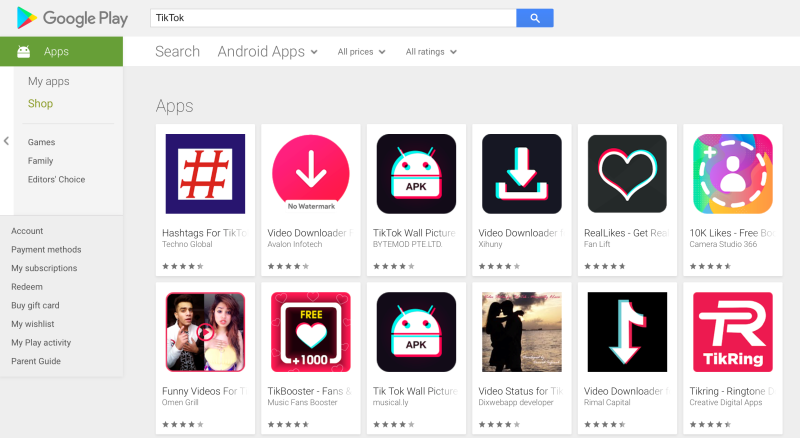 The government sent a notice to Google and Apple earlier today to pull the app from their respective app stores, preventing any more downloads, as first reported by The Economic Times. Google’s Android mobile operating system runs on more than 95% of smartphones in India, according to estimates from research firm Counterpoint.

Notably, users who already have TikTok app installed on their Android smartphone can continue to use the service.

In a statement earlier today, a TikTok spokesperson told VentureBeat that the video service had “faith in the Indian judicial system and we are optimistic about an outcome that would be well received by over 120 million monthly active users in India, who continue using TikTok to showcase their creativity and capture moments that matter in their everyday lives.”

In the meantime, the state court (Madras High Court) has appointed Arvind Datar as an independent counsel to look into further proceedings. The next hearing will be on April 22, where Bytedance will likely try to make a case for why the ban should be withdrawn.

At an event in New Delhi earlier this year, weeks before the app landed itself in trouble in India, TikTok representatives told VentureBeat that the company was growing its content moderation team in India and training its machine learning algorithms to weed out questionable content in several local Indian languages. When asked how many moderators the company had in India, representatives declined to share a specific number.

The Indian court’s step today underscores a growing sense of accountability that the Indian government expects of social media. In December last year, the Indian government proposed that any “intermediary” that had more than 5 million users in India to set up a local office, and appoint local leaders who would be deemed responsible for any trouble their platforms incurs in the nation.

Such a move would significantly limit, or even end, the so-called safe harbor laws in India that technology companies have long enjoyed. Some critics likened the proposal to censorship in China.

Commenting on today’s move, Salman Waris, a technology lawyer at TechLegis Advocates & Solicitors, told Reuters that the legal action against Bytedance could “set a precedent of Indian courts intervening to regulate content on social media and other digital platforms.”

Update at 8 p.m. Pacific: Apple has also pulled TikTok app from the App Store in India.