The ascent continues. Google accounted for a ridiculous 69.17 percent of all U.S. search in June, according to new data from Hitwise. What’s even more ridiculous is that the search engine is still adding market share. One year ago it accounted for 63.92 percent. Just last month it was at 68.29 percent.

For Google to keep gaining market share, someone else has to lose it. In this case it is once again Yahoo Search and MSN Search. Yahoo Search is down to 19.62 percent after last year being at 21.31 percent. Microsoft (which runs MSN) is fairing much worse percentage-wise, down to 5.46 percent from 9.85 percent last year. 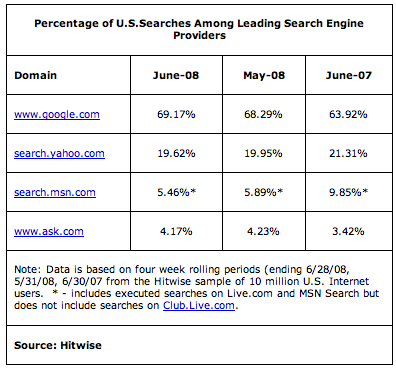 This data continues to show why it is important for Microsoft to acquire Yahoo’s search business if it has any hopes of even remotely competing in the search space. It has been trying to do so for the past several months, but the two sides cannot see eye to eye on terms (or just about anything else).

Microsoft’s rather comical attempt to pay users to use its Live Search product doesn’t appear to be paying off for anyone except those users it is paying. Perhaps its purchase of the semantic search site Powerset will help it fair better, but results from that are likely a long way off.

Meanwhile, in many parts of the world Google Search is even more dominant. In the U.K. for example, Google accounts for 87.34 percent of all searches. Yahoo and Microsoft both hold about 4 percent. In Australia, Google controls nearly 88 percent of all searches — and that is after falling from nearly 89 percent last month. Life at the top is tough.

While Ask.com had been managing to gain some traffic over the past year, it too fell in the past month. It now accounts for 4.17 percent of all U.S. search traffic.

update: Some of the stats from Hitwise have been updated.