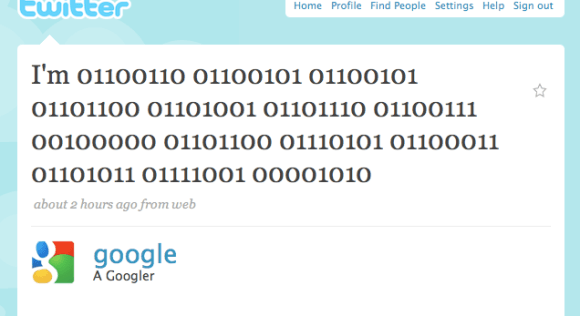 That was the first official tweet from Google’s official Twitter account today. The second tweet announced the launch of its App Status Dashboard, which we just covered. This looks to be another move in the direction of transparency and communication from the Googleplex, which is always a good thing.

Slowly but surely, various arms of Google have been joining Twitter over the past few months. The first was YouTube, I believe. Run by “A Googler,” the same handle it uses often on blog posts, this official account promises “News and updates from Google.”

I just wonder if Google will join in the bitch-fest the next time Gmail goes down. That might cause the Internet to collapse on itself. And if Twitter goes down, will Google move over to FriendFeed (a company started by ex-Googlers) to complain about it?