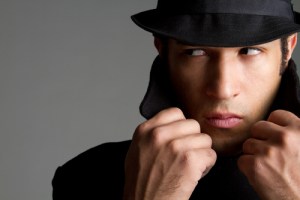 Oh Google, your aptly named new product Schemer doesn’t have us fooled. We know you’re calling it a new way to discover things to do, but we see this for what it really is — an assault against Foursquare and the company’s hold over quality location-based content, city tips and to-dos.

The product was first announced on Google+, and heavily promoted on Twitter by the Schemer team and product media partners. But Google didn’t really tell us much about what Schemer is or what it does. And it certainly didn’t make invites easy to come by.

Instead, Google crafted a rather ambiguous description, posted an even more obtuse video, and left it up to interested parties to sleuth out invites and details.

“Whether it’s exploring a new city, checking out a friend’s movie recommendations, or just finding new activities for your weekends, Schemer lets you discover new things to do, share schemes with friends, and make the most of your day,” an introduction to Schemer on Google+ reads. “We’re a scrappy team of Google engineers who wanted to help people do fun stuff in the real world.”

I tracked down an invite via Twitter to test the tool out, and I can tell you with all sincerity that Schemer is pretty mediocre out of the gate. If you’re looking to this product to tell you something fun to do in your city or solve your weekend What should I do? plans, look elsewhere, at least for the time being.

But, and here’s a dramatic pause worth drawing out, Schemer has all the makings of a Foursquare challenger. It’s definitely not a check-in service (though Foursquare would tell you that it’s not either), but it is centered around helping users find things to do in their cities, and elsewhere in the world. Sound familiar? Right. That’s Foursquare’s mission.

Schemer is structured around the user building a list of “schemes” (a.k.a. things) to do, surfacing ideas from friends and experts, and marking off the schemes that have been completed. Doesn’t that sound a whole lot like Foursquare tips and to-do lists?

Now, consider that Google has launched Schemer with media partners such as Bravo, Zagat, Thrillist, Food Network, Rolling Stone, IGN and Entertainment Weekly, each of which have Schemer pages replete with schemes that read a whole lot like the tips you’ll find on Foursquare brand pages. Do you start to see a pattern.

If not, let me break it down for you: Google is building up a base of location-based tips, sourced from media partners and users, that has the potential to evolve into something quite grand.

Schemer is also tied into Google+, making it inherently social and easy for folks to add users and — this is key — media partners to their Google+ Circles. 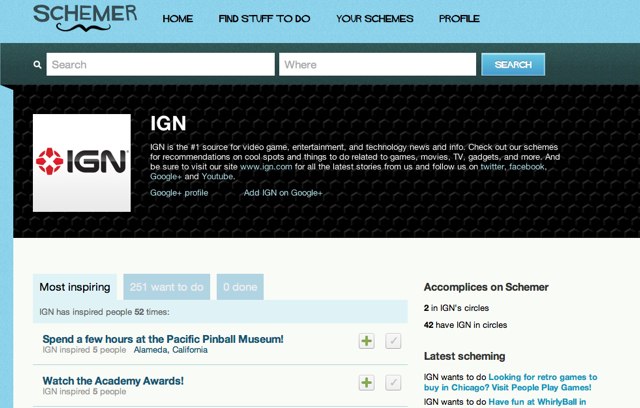 There are other features, of course, and it’s not all about location all the time, but there certainly is a lot of overlap with Foursquare here.

The Schemer name implies intentional subterfuge — even the video drives this point home — and this is Google’s veiled attempt to take over the location-based content and discovery category, and it’s a deliciously diabolical one at that.