Google and Twitter today announced Google Search on mobile devices will now surface tweets directly on the results page. This applies to the Google app for Android and iOS as well as “any browser on your phone or tablet.” The desktop version will get the same treatment “shortly.”

Update on August 21: Tweets are now appearing in Google search on desktop and in English internationally, Google noted in an update to its blog post today.

Twitter’s real-time content integration into Google’s search results is currently only available to U.S. users searching in English. The feature will roll out to more countries “in the coming months.” 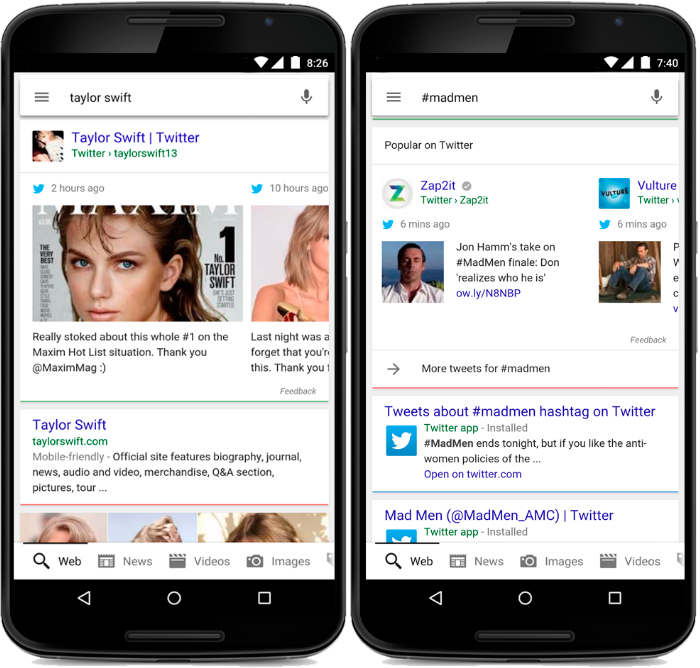 Tapping on a tweet in Google search takes the user directly to Twitter. That means the user can not only view the tweet’s content, but its context and anything related.

This type of partnership isn’t technically new for Google and Twitter. In December 2009, Google launched Real-Time Search, which featured tweets and other timely information. The deal expired in July 2011, however, and Google’s real-time search went with it.

Today’s integration was announced in February. During Twitter’s Q4 2014 earnings call, Twitter CEO Dick Costolo confirmed that the company had signed a firehose deal with Google to bring tweets right into Google’s search results in a few months. That time has now arrived.

Google explains what it hopes to gain with the Twitter partnership: “It’s a great way to get real-time info when something is happening.”

Twitter explains what it wants to achieve with the Google partnership: “By deeply integrating Twitter’s real-time content into Google search, we hope you find it easier than ever to explore your interests across both Twitter and Google.”

In other words, Google is hoping to boost its real-time search chops and Twitter is aiming for more users and engagement. Google wins right off the bat, as its search engine is immediately better at giving users what they’re looking for. Twitter still has a lot of work to do — it needs to convince Google users arriving on its site to sign up, come back, and then actually use the social network.