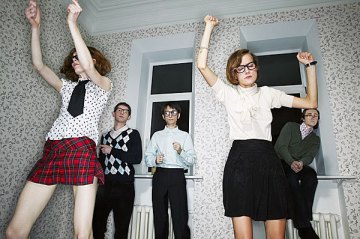 When Google was fresh off its $27 billion initial public offering almost six years ago, Facebook was but a college social network fueled by hormones and the occasional lascivious profile photo. It had just around 200,000 members and $500,000 in angel funding.

Times have changed. What was once a fun diversion is fast-becoming a threat. Last month, with more than 400 million active users in tow, Facebook articulated an ambitious vision to map the web via the way it knows best — through people, their relationships and genuine interests — instead of through hyperlinks between pages.

With social plug-ins and “like” buttons strewn across more than 100,000 sites in a little more than two weeks, a very natural step in a few years would be to start selling advertising across the web (although Facebook has never explicitly stated this).

That would create direct competition to Google’s advertising network AdSense, which brought in $2.04 billion in revenue last quarter. Furthermore, the “like” button, and the data Facebook collects from it, will pave the way to an improved search engine that could rank results by your friends’ affinities to them. In a more distant future, that could become competitive to Google’s bread and butter, its search keyword service AdWords.

To be clear, Google is doing fine. It pulled in $6.5 billion in net income last year and has a market cap of $162 billion, compared to Facebook’s implied market capitalization of $22 billion based on recent trades on SharesPost, a secondary exchange for shares of privately-backed companies. And search and social networking aren’t exactly competitive. In many cases, they’re complementary.

But Google’s mission of organizing the world’s information is undeniably tied to human relationships. People construct meaning in their lives through their connections with others and like all mediums that have come before it, the web is a tool of expression for and by people, not machines. In a few years, Facebook could present Google with some serious competition for targeted online advertising dollars. Plus it would have the data to track consumers through their entire decision-making cycle.

So now, Google is rethinking its social strategy from the ground up. It’s on the hunt for an executive to lead the way, according to a listing for a “Head of Social” published this week.

What that person will inherit is a patchwork of products that are social in one way or another but don’t fit together to form a coherent experience. Google needs to articulate how peoples’ identities and their relationships figure into its core mission to “organize the world’s information and make it universally accessible and useful.”

Then it needs to get its ducks — or mess of vaguely social products — in order. Some should go while others should probably be merged. Here’s a list of them:

Buzz: This is Google’s sharing and status update service embedded in Gmail. The company hasn’t updated stats since the product launched, when it said the social networking service attracted 9 million posts and comments in two days. There is also a mobile component to Buzz that overlaps with Latitude and involves “checking in” or temporarily sharing your location. It also integrates a number of tools from below like Reader, Profiles, Blogger and Picasa.

Orkut: Google’s original social network, created by and named after engineer Orkut Büyükkökten, is now defending its last bastions of popularity in Brazil and India. The company says it has more than 80 million users worldwide, with 30 million photos shared per day.

Social Search: This product brings in search results published or shared by a person’s friends into regular queries. There aren’t any public stats on usage.

Aardvark: This real-time social question-and-answer service had about 90,000 users in the fall before it was acquired for a reported $50 million.

Latitude: Google’s location service, which continuously shares a person’s whereabouts, has 3 million active users. It doesn’t use a check-in model — yet.

Wave: There also aren’t any exact stats here, except that Google says the service has more than 1 million active users. The Wave team also got the technical talent from AppJet, the company behind the really neat, real-time document editing tool EtherPad.

Profiles: These are the personal profiles that Google users can show off when using one or more of the company’s many products. There also aren’t any public metrics here.

OpenSocial: This is a set of common application programming interfaces (APIs) for social networking apps that Google built alongside MySpace and other social networks and launched in late 2007. As of last summer, the company said OpenSocial reached 800 million users worldwide and had 15,000 applications. hi5, Orkut and Ning are users too.

Friend Connect: This is Google’s way of sprinkling social features across the web and allowing users to log-in and identify themselves. As of last November, it was on at least 9 million blogs mostly thanks to Google Blogger which hosts it on most of its blogs. Facebook Connect is on 250,000 sites.

Blogger: Blogger had 300 million 30-day active readers as of last September and came to Google through the Pyra Labs acquisition in 2003. (Co-founder Ev Williams famously went on to co-found Twitter.)

Picasa: Google’s photo-sharing service. There aren’t any stats on total photos uploaded per day, except these rather vague ones: “Every 16 seconds people view enough photos from Picasa Web Albums to cover an entire football field. Every 8 minutes, more photos are viewed on Picasa Web Albums than exist in the entire Time-LIFE photo collection.”

Gmail: There aren’t any public statistics, but Comscore estimates that the e-mail service had 176 million unique visitors a month.

This stable of loosely connected products is a legacy of Google’s university-like culture of bottom-up innovation, which lets engineers come up with all kinds of projects in 20 percent time. By contrast, even though Facebook pushes a strong hacker culture, the big product ideas tend to come from the top with founder Mark Zuckerberg playing visionary.

It’s also the result of a culture that never had to take social networking seriously. Flush with AdWords revenue, Google had the luxury of being able to fail. It could build “show-car” products that didn’t have to win dominant market share. And it never wanted to — at least not one-thousandth as much as Zuckerberg did.

A prospective “Head of Social” will have to confront many more deep, underlying cultural issues at Google. The company’s focus on data and sheer computing power have often come at the expense of its empathy and understanding of user experience in social products. This culture made it acceptable for Google Buzz’s designers to think that algorithmically inferring your friends from Gmail would be okay. There was a telling observation by early Facebook investor and PayPal co-founder Peter Thiel in the forthcoming book, “The Facebook Effect,”

He said: “A very profound difference is, I think, at its core, Google believes that at the end of this globalization process the world will be centered on computers, and computers will be doing everything…. The Facebook model is radically different. One of the things that is critical about good globalization in my mind is that in some sense humans maintain mastery over technology, rather than the other way around. The value of the company economically, political, culturally — whatever — stems from the idea that people are the most important thing. Helping the world’s people self-organize is the most important thing.”

The biggest and best social companies that have grown out of Facebook’s platform start the product design process by thinking about human compulsions. Social gaming company Zynga has psychological rewards and points of frustration down to a science.

The “Head of Social” will also face a “brain drain” that has seen company talent often leave to lead the charge for the other side. Former Google vice president Sheryl Sandberg, Bret Taylor, who saw through more than 25 Google product launches including Maps, and Gmail creator Paul Buchheit, not to mention scores of other product managers and engineers ended up at Facebook as the search giant grew to more than 20,000 employees and became encumbered by bureaucracy. (Of course, there was also no longer a hanging carrot of an IPO or exit left anymore.)

With the right level of authority and freedom, a “Head of Social” could do a number of things. Google could fork over enough money to convince Williams and Twitter’s leadership to finally give up their independence. They could then heavily push Twitter integration with social search, so users could pull up results from friends. They could finally put Wave of its misery or at least, make it usable. They could clean up iGoogle and put status updates from friends organized by popularity on the company’s historically spartan homepage.

The problem is anyone who has a whiff of talent in this area might be better off building a company than navigating the internal politics of Google. Whatever seven-figure compensation package the company could offer may not stack up against the potential impact and wealth that could come through creating a company from scratch. Or better yet, a company that leverages Facebook’s graph.