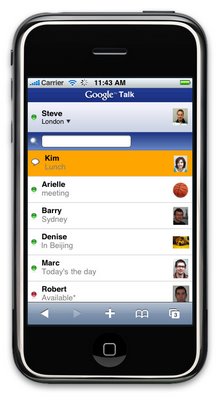 Google has unveiled a web-based version of its Google Talk instant messaging client specifically built for the iPhone. Quite simply: It’s amazing — but it has limitations.

Just as with Google’s other apps built for the iPhone, Google Talk is laid out in a way that is nicely tailored for the device. Its main screen is a list of your contacts’ names, icons (if they have one) and status messages. Each contacts’ area is big enough for you to easily click on any of them. Doing this will take you to another screen with a big white chat area to have a continuous IM conversation.

I’m using it right now to talk to fellow VentureBeat writer Dean Takahashi; it’s simple to use and fast (granted, I am on a Wi-Fi connection right now).

You have all of the standard options you have on regular Google Talk including changing your status message, searching contacts and you can even take chats “off the record,” meaning they won’t be saved to Google’s databases (if you have that feature turned on).

But if you do have that feature turned on and you have a chat while on the go, you can simply to into Gmail and find it under in the ‘Chats’ area. This is great for referencing things said in a conversation at a later point. Such as addresses or numbers.

Just as with the web version, the iPhone version of Google Talk will also tell you if a friend is currently typing. It’s amazing how well everything has been ported over.

While it’s a great app in and of itself, the real excitement is in its promise. A real instant messaging service could greatly eliminate the need for the massive rip-off that is text messaging.

It’s not there yet. For this app to currently work, you have to have your Safari browser open all the time and pointed to the Google Talk page. When you leave the page or the browser, it shuts down and sign you off.

However, at the WWDC event Apple talked about its upcoming Push Notification Service that will presumably allow for instant messaging applications to mimic running in the background while using Apple servers push updates to your phone. It’s not clear how well this will work, or what restrictions (if any) Apple will place on 3rd party IM applications. (I’d venture to guess that if any of the IM clients are going to work unrestricted, it will be Apple’s own iChat application — which it hasn’t announced for the iPhone — yet.)

One thing is clear though, this Push Notification Service will be meant for native applications, not web apps. So if Google wants Google Talk to work with this, it will need to make an official app for it.

AT&T can’t be too happy with companies releasing applications such as this. First of all, a lot of people are now going to have the Google Talk page open all of the time, constantly keeping their connection alive and eating up data. But more importantly, it has the potential to eat into one of AT&T’s big money makers: text messages.

While IM applications on devices such as the iPhone may not eliminate the need for text messaging right away (other phones do have IM after all and text messaging is still around), at least for me, they will drastically cut down on the number of texts I send.

Ever since I got the iPhone a year ago, my texting amount has gone up drastically. One reason for this is that Apple made a beautiful texting application that looks like iChat and saves the previous texts you’ve sent to a person. But texting is going to be between $5 and $20 dollars a month extra beginning with the iPhone 3G. Yes, that is on top of your data plan — I ask again: Isn’t a text message data? And a very small amount of it to boot?

There is no way I’m paying an extra $20 a month to send 160-character messages when I’m already paying for “unlimited” data. Instead I’ll move most of my conversations over to mobile IM and get my money’s worth of the data I’m paying for.

This is an early step towards the death of text messaging as we know it, but an important one. The next step will be a native IM app on the iPhone. I fully expect that the mobile companies will eventually start to include unlimited text messages in their unlimited data plans. Sprint is doing this already. That’s the way it should be.