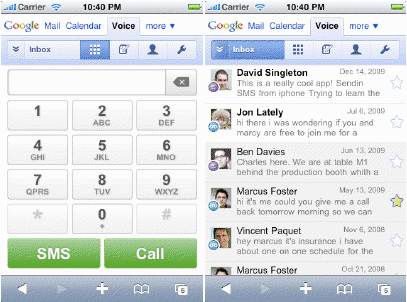 Google Voice finally made it onto the iPhone after a very long and unusually public dispute with Apple today.

Google did the runaround by making it a web app, not a native one in app store, as vice president of engineering Vic Gundotra hinted earlier this month. Instead of loading a proper app, a user will go to http://m.google.com/voice in their browser. It’s based on HTML5, which Safari now supports, and uses AppCache to let you use it without a network connection and local databases so you don’t lose data if you close the browser.

When Google originally submitted the app during the summer, it didn’t make it into the store. Apple maintained that it was studying Google Voice out of concern that it would duplicate the phone’s core dialing functionality, while Google told the FCC Apple had flat-out rejected it. The incident became another thorn in the increasingly difficult relationship between the two companies.

Google Voice makes calls free or very cheap for international dialing and provides transcriptions of your voicemail and free text messages, which challenges parts of the core revenue model for mobile operators.