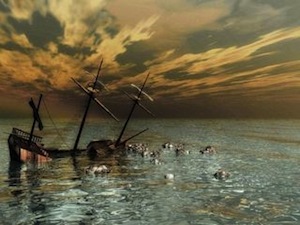 Google announced in a blog post today that it’s ending development on its Google Wave collaboration product and may shut down the site completely next year.

The announcement isn’t a huge surprise, given the tepid response to Wave as a product (as opposed to the hype that greeted its announcement). Back in December, we semi-seriously listed the Wave team as one of the “startups” whose dreams Google has crushed in 2009: “So by overhyping Wave, failing to communicate how to use it, and inviting the public in too early, Google bungled its own dream here.” Google further confused matters by unveiling another collaboration tool called Buzz — though it’s not unheard of for the company to release overlapping products, for example its two operating systems Google Android and Chrome OS.

Google has canceled plenty of products before, but this feels like a particular letdown because it had built up Wave so much. The Wave launch was the main announcement at Google’s I/O developer conference last year, where Lars and Jens Rasmussen (the brothers who developed Wave), as well as Vice President of Engineering Vic Gundotra, described Wave as reinventing email, reinventing document collaboration, even reinventing communication. That kind of ambitious talk swept along a lot of fans (including me), but it crashed against the reality of Wave’s early product, which was both buggy and difficult to understand.

But despite these wins, and numerous loyal fans, Wave has not seen the user adoption we would have liked. We don’t plan to continue developing Wave as a standalone product, but we will maintain the site at least through the end of the year and extend the technology for use in other Google projects. The central parts of the code, as well as the protocols that have driven many of Wave’s innovations, like drag-and-drop and character-by-character live typing, are already available as open source, so customers and partners can continue the innovation we began. In addition, we will work on tools so that users can easily “liberate” their content from Wave.

Part of the reason Google decided to give Wave “the benefit of the doubt” (as cofounder Sergey Brin put it last year) was the fact that it was developed by the Rasmussen brothers, who also created Google Maps. Presumably this frees them up to work on other projects, although there’s no word on what those might be.