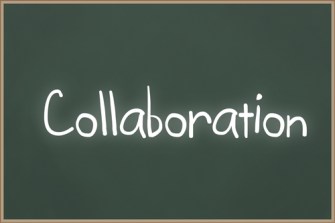 Google released a slew of updates for its social network Google+ today. With these new updates, Google+ is turning into the social network of choice for web and mobile collaboration.

Reid Hoffman, founder of LinkedIn, described Facebook as the backyard barbecue of social networks, and LinkedIn as the office. To extend the metaphor, Twitter must be the hyperactive, attention-deficit-disordered child of the two, while Google+ is the live/work space. It’s not the free-for-all that is Facebook, nor as buttoned up as LinkedIn. It’s the cool office with beanbag chairs. It’s the network for that hoodie-wearing entrepreneur in us all.

Google+ first came out in June and has since been updated with 107 new features. This last round, however, may be the most robust. Hangouts in particular have gained features that put them in competition with mobile collaboration tools such as Citrix’s GoToMeeting and Cisco’s WebEx.

Let’s run down the advantages of Google+ Hangouts for work-related collaboration.

Multiplatform support. Video Hangouts (not just the text-based Huddles, which are now folded into a feature called Messenger) are now available on Android smartphones, with iPhone support coming soon. You can also, as before, access Hangouts via a web browser on your PC.

Simultanous users. Google+ Hangouts supports up to 9 people at one time, which can lend itself to a quick brainstorm or touch base. This is especially beneficial for those who have co-workers or project participants in various states. It might also work out for a company with multiple people at different events needing to sync up.

Screen sharing. On web-based Hangouts, you can now share a view of your computer’s screen so others can follow along in demos and the like. Other services, such as WebEx and GoToMeeting, have similar features but for a fee. For example, WebEx’s service costs $19 a month or more for 8 participants and goes up from there. Google+ is free.

Document and Sketchpad sharing. Hangouts now support video chat with simultaneous Google docs editing in addition to Sketchpad access for drawing out your ideas. The Sketchpad also enables multitasking and can be accessed while others are using it, not to mention its great for visual learners.

Public conferences. One issue with Hangouts is that they are relatively public, showing those outside your circles to join your chats. And while we all love alliteration, “proprietary” and “public” don’t go together. Thus, if you’re using Hangouts for work-related discussions, you may need to police your hangouts to ensure no outsiders are watching your screen shares and listening in on your conversations. This is a serious limitation for getting work done on Hangouts.

On the other hand, if publicity is your goal, Google+ Hangouts might be quite useful. For example, Google+ now allows you to name your Hangouts to make them easier to find. There’s also a new feature called Hangouts On Air. When you’re on air, you can group chat with up to nine people as per usual, but your Hangout can also be recorded and broadcast live to anyone on Google+ who would like to listen. This helps you reach not just  your own team, but the whole of your Google+ audience, so you can use it for product announcements, introductions to new hires and more.

Unlike LinkedIn, Google+ is not oriented toward networking or finding new job prospects. Unlike Facebook, Google+ is not photo centric or geared toward vanity and sharing personal accomplishments. On the other hand, Hangouts can just as easily be used for personal reasons as for work. You can use Hangouts to hold a concert, meet up with old friends, let long-distance family meet a new baby, or play charades.

In other words, Google+ is like a loft-bed with a desk underneath, a tuxedo t-shirt, or a mullet. There’s some party in there mixed with the business.