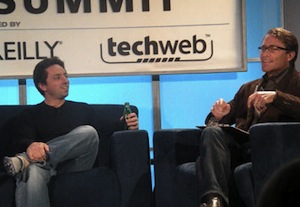 Google co-founder Sergey Brin made a surprise appearance at the Web 2.0 Summit in San Francisco today, where he was booster-ish on almost everything (Google, Bing, hardware, web advertising, more), but did admit to one disappointment: The delays in releasing a version of Google’s Chrome browser for Macs.

“The timing of that has been one of the disappointments of Chrome project for me,” Brin said.

He immediately added that he has been happy with Chrome overall, but if he had his way, Chrome for Mac would be available in a public beta right now, and in fact would have launched at the same time as the PC version.

“This delay is something that many of us still suffer through,” he said. (I’ll add that I’m an increasingly dissatisfied Firefox user, so I’ll definitely be trying Chrome for Mac as soon as there’s a fully baked beta.)

Interviewer John Battelle also brought up a common criticism of Google, that it seems to seems to be doing too much, spreading itself thin with mobile operating systems, web browsers, and most recently Chrome OS, the operating system for netbooks and eventually other computers. Is this a case where Google is swinging at many different things and hoping to bat .350? Brin said he isn’t familiar with baseball, but when Battelle explained that means hitting 35 percent of balls, Brin answered, “I hope we fare better than that.”

When Google decides to expand to a new market, Brin said, it’s usually based on the problems it has encountered, either as individual workers/technology users, or as a company. For example, Gmail came out of employees’ frustration with existing email products, where desktop software had difficulties like switching to a new computer, while most webmail products were “toys.” And the Android mobile operating system came out of Google’s problems developing applications for existing smartphone platforms, which Brin said were closed, proprietary, and lacked good web browsers.

It seemed like Brin was just getting started on this topic, but Battelle refocused the discussion on Android, specifically rumors that Google is developing its own Android phone. (Android devices have been built by other handset manufacturers, so far.) Brin declined to answer specifically, but he noted that Google has been working closely with all Android manufacturers, not developing software that’s “divorced” from the hardware.

Perhaps my favorite quote in the interview came when Battelle asked about another complaint, that Google isn’t sharing enough of its search revenue with the news publications that it’s linking to. Brin said it’s incorrect to suggest Google is causing newspapers’ problems or stealing their revenue.

“I think they are conflating Google with change,” he said. “I don’t agree with the conclusion, but I certainly hear the pain and I think it is important to have institutions like the newspapers, the publishers, and so forth.”

(For more on how Google says it can increase newspaper revenue, see this article in the Guardian.)