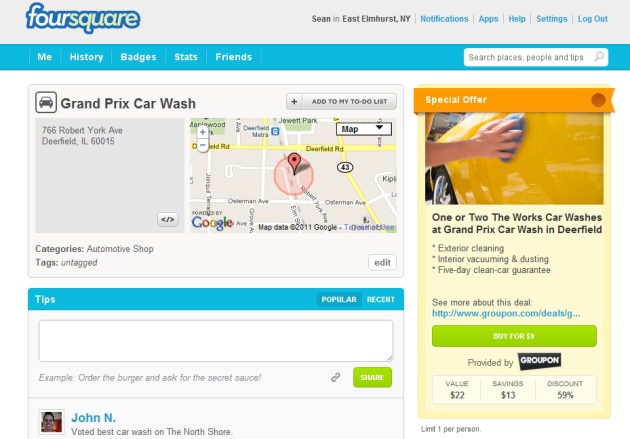 Location-based check-in service Foursquare and local deals site Groupon are partnering up to offer real-time daily deals, Foursquare confirmed today. Several deals have already gone live in Chicago (like the one pictured above), and deals all over the U.S. and Canada should be live by Sunday.

“Foursquare’s goal is to help people connect in the real world, discover new places, and save money through specials,” a Foursquare spokesperson told VentureBeat via email. “We’re excited that Groupon’s daily deals and real-time deals will now be included in our platform.”

Groupon’s deals will be accessible through the “Explore” tab in Foursquare’s mobile app. Groupon is now Foursquare’s sixth daily deals partner. Foursquare partnered with LivingSocial, BuyWithMe, Gilt City, AT&T Interactive, and Zozi a few weeks back. Foursquare also announced a partnership last month with American Express for instant deals when you link your AmEx card to your account and check-in at a participating store.

Groupon’s mobile service, Groupon Now, has only rolled out to a few cities, so the Foursquare deal will give the company access to Foursquare’s more than 10 million users.

Groupon and Foursquare will split profits on deals.

The move to add Groupon into the mix of Foursquare partners is important for both companies because they need to find more ways to monetize.

Groupon filed for a $750 million IPO back on June 2 but is currently losing a lot of cash. Before it goes public, the company will want to show how its business can be profitable, and real-time local deals are one way to push it in the right direction.

Last we heard on Foursquare, the company had closed a $50 million round, with a valuation of at least $600 million. Its aggressive strategy of partnering with daily deals companies will likely help it start bringing in much more revenue.

What do you think of the Groupon and Foursquare deal?