A hoax made the web rounds today, claiming that Steve Jobs suffered a heart attack. Though last week’s announcement that the Apple chief executive would take medical leave from the company is indeed true, what isn’t true is this article, seemingly hacked into Wired.com’s vulnerable image view–serving up the fake headline in a pseudo Wired domain.

The story flaunted the rather childish headline, “Steve Jobs in has had a Cardiac Arrest,” and offered other obvious misspellings, such as Jobs’s home town of “Paulo Alto” and the Apple board’s “sombre” response, among others (Someone call the “ambulence”!). Yet, the Twittersphere was still alive with the myth, with people spreading the rumor as much as they were dispelling it.

How could people believe such a clumsy prank? It seems that after news of Jobs’s ailing health, folks are bracing for the worst. Apple stock already stumbled earlier this month after the real medical announcement, and now the SEC is looking into possible wrongdoings by Apple in failing to disclose any health issues. For those who make the argument that Jobs has nothing to do with the company he founded, jolts such as these seem to suggest the potential for hysteria if Jobs leaves his post permanently — at least on Twitter.

For those who missed it, here’s a taste of the Twitter conversation: 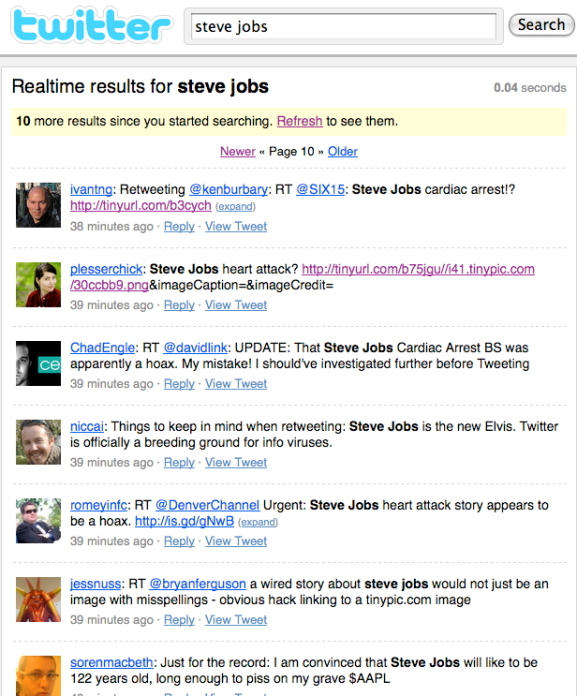