Fox News on Monday said that its Fox News Politics Twitter account had been hacked after the account falsely posted that President Obama had been shot and killed while campaigning in Iowa. President Obama is celebrating July 4 at a barbecue with military families at the White House.

One of several Obama-related tweets in the early morning hours of July 4 read:

The hack highlights the continuing problem of online security for individuals and businesses from hackers that attack using all kinds of methods. The now-defunct hacking group LulzSec and active hacking collective Anonymous have made headlines during the last few months with attacks on U.S. Senate, CIA, Sony’s PlayStation Network, and games like Minecraft and EVE Online.

The hacking group Script Kiddies, which purportedly desires to work with Anonymous, claimed responsibility for the hack to Stony Brook University’s Think Magazine. “We are looking to find information about corporations to assist with antisec,” a Script Kiddies representative told Think Magazine. “Fox News was selected because we figured their security would be just as much of a joke as their reporting.”

Not only does the hack suggest that Fox News may not have selected a strong enough password for its Twitter account, it also means Twitter’s security process may not be robust enough.

“We will be requesting a detailed investigation from Twitter about how this occurred, and measures to prevent future unauthorized access into FoxNews.com accounts,” said Jeff Misenti, vice president and general manager of Fox News Digital, in a statement.

The Fox News Politics’ series of alarming tweets can be read below: 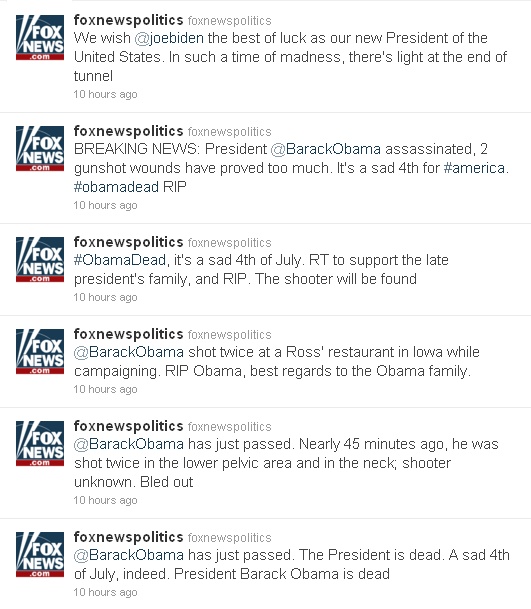