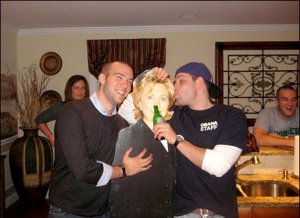 Applying to a position in Obama’s cabinet and administration is tougher than climbing Mt. Everest while performing open-heart surgery. But even after a candidate’s passed the intense vetting process, it doesn’t mean they automatically stay out of trouble, as we’ve just seen with head speechwriter Jon Favreau.

The seven-page, 63-question application contains the usual queries about previous employment, finances and legal issues. But Question number 58 of the questionnaire asks for the applicant to provide links to any websites where they have personal profiles on social networks such as Facebook and MySpace. Applicants also have to fess up to whether or not they’ve ever blogged, sent incriminating e-mails or kept a diary, making this the most invasive application yet. However, the application forgets to ask, “Are you foolish enough to be caught groping a life-size cardboard cutout of the future Secretary of State?”

Favreau’s answer would be yes, since a recent Facebook photo catches him in exactly that predicament. Among other photos, Favreau is seen clasping his hand to the cardboard chest of Senator Hillary Rodham Clinton (and no, his hand’s not over her heart) while another friend tips a beer to her lips.

What’s strange is the timing. The Facebook photos (which were up for about two hours yesterday afternoon) surfaced soon after Favreau was recently appointed director of speechwriting for the White House, and were immediately taken down along with every other image of Favreau except a profile photo. The photos, taken recently at a party, were up for such a short time that it seems someone didn’t get the memo about not posting anything that could embarrass the President-elect.

What’s most interesting is that the transition team vetting document specifically asks about photos on social networks, as well as any other identity/name a candidate has used online. Now something as seemingly innocuous as posting as a fan to a band’s website or a blog rant written during one’s angsty teenage years could bring an application into question. Oversharing on social networks has been a major issue for employers and universities, with a MySpace profile costing a woman her college degree among other stories. Even the seemingly lighthearted world of beauty pageants has been affected, with a blackmail scandal involving Facebook photos of Miss New Jersey last year. We’re sure that Favreau has penned a very eloquent apology to Sen. Rodham Clinton and President-elect Obama.