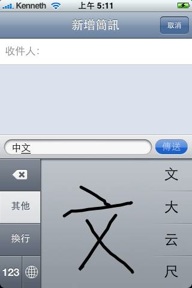 With a population of nearly a billion and a half people, the Chinese market is any mobile device builder’s dream. Even landing on just one of China’s mobile networks could yield hundreds of millions of new subscribers. Apple is well aware of this — and today we have more proof in the form of Chinese handwriting recognition built into the iPhone 2.0 software.

The feature, uncovered by Chinese site Wretch.cc (translated by MacRumors), would allow users to draw characters and have the iPhone suggest four possibilities of what it could be on the right side of the screen. One would assume that these characters are drawn with a finger rather than a stylus (which the iPhone does not have), but the character lines seem awfully thin for a finger stroke.

There is no support for English handwriting yet in the iPhone 2.0 software, which will be available to consumers this summer. As MacRumors notes, Apple’s popular Newton PDA device from the 1990s made great strides in digital handwriting technology. Apple has been hiring in this field recently as well.

China will no doubt be a focal point of expansion for the iPhone the rest of this year and next. Who knows how long it will take given that Apple just recently reached a deal to get the iPhone to Canada later this year.