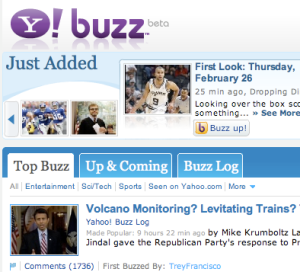 Twitter, Digg, Facebook, Reddit, Delicious. These are all social sites that are well known for sharing stories with a massive amount of people. Yahoo Buzz? Not so much. But apparently, it’s also in the business of sharing stories. And today is its first birthday.

In a message it sent out on Twitter, Yahoo notes that a story is buzzed (voted on) every two seconds. It claims that 300 million story clicks have resulted from buzzed-up stories that make Yahoo.com — and incredibly, that it’s the number one social content site.

Now, I consider myself to be a pretty savvy Internet user. So why is that it that I never hear any talk about such an impressive site? Is it the media’s new Twitter bias? Social media types’ fascination with Digg? I don’t think so. Even Yahoo seems to acknowledge on its birthday blog post that a lot of people don’t know much about Yahoo Buzz. The intro includes the line, “What’s that, you say? You don’t know Yahoo! Buzz?”

Naturally, that possibility is the reason why this site and others have “Buzz Up” buttons on each post. But while we see a very small trickle of traffic every once in a while from the Yahoo Buzz domain, it seems to me that not that many people are actually using it — certainly not for tech news. Most of the top stories on the Buzz main page right now have between 10 and 200 buzzes. The top overall for the day have a few hundred, but only one has over 1,000. Compare that to Digg, where a lot of popular stories have several hundred to several thousand diggs.

Also, almost all of the popular stories on the Buzz main page are general news or celebrity news. That seems appropriate given that is the type of content most often on Yahoo’s main page. And perhaps that’s why I never hear about Yahoo Buzz — I don’t really cover any of that stuff. Meanwhile, the popular tech items have an underwhelming 1 to 10 buzzes. And almost none of these items have any comments. Again, compare that to Digg, where popular items have hundreds of (albeit idiotic) comments.

When Google nearly bought Digg last year, we suggested that maybe Google should just build its own Digg, which is essentially what Yahoo did with Buzz. But maybe that was the wrong call. I think Yahoo Buzz is simply puffed up by its Yahoo.com association, but I don’t see it as a major entity on the web.

“The site already has more unique monthly visitors than any other social content site in the U.S., according to comScore Media Metrix,” Yahoo’s post touts.

Okay, so why is hardly anyone actually using it? Are they just going there and leaving? And if so many people are visiting it, why is no one talking about it? It seems to me it has absolutely no — for lack of a better word — buzz. Sorry to be a (birthday) party pooper.