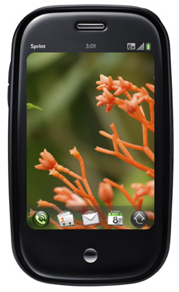 The Palm Pre is a tad young to threaten the established and massively popular iPhone. But some Silicon Valley developers are saying the Pre’s operating system is far better to develop on.

If that’s true, it raises significant questions about the balance of power in the sexy smart phone industry. Palm may soon draw scrutiny from bigger players. Already, analyst Ashok Kumar has stirred the market, suggesting Dell should buy it (Dell’s stock price even dropped on the recommendation).

So far, the iPhone has had a vice-like grip on developers, because it’s been so fun to develop on. Developers can build awesome looking applications, with few barriers. With developers flocking to it, the iPhone is brimming with applications — all of which has driven sales of more than 40 million iPhones and iPod Touches.

But during a dinner conversation organized by VentureBeat last night at Blue Run Ventures in Menlo Park, Calif., developer Christian Sepulveda of Pivotal Labs said that has changed. Sepulveda (pictured below), whose group builds applications for companies wanting mobile offerings, said he’s advising his clients — Twitter, BestBuy and Salesforce among them — to start on the Pre. The phone’s operating system, called WebOS, offers the most compelling place to build and test a prototype, for both cost and technology reasons, he said. 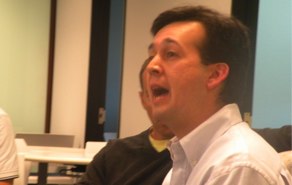 Pivotal does not have a business relationship with Palm, he told us last night. So Sepulveda’s comments appear to be objective. Pivotal is also well regarded. It was the firm that Twitter called in to help it manage its Web offering, after high traffic growth kept crashing Twitter’s site.

Clearly, the Palm Pre is so new on the market, and so few phones have been sold, that developers would be crazy if they developed for WebOS and didn’t try to get distribution on other phones, such as the iPhone. But because WebOS is the easiest platform to build, test, review and iterate on, most developers can then port their work over to other phones where more attention can be put into making it work for that particular device, he said.

Of course, with 50,000 apps built on the iPhone in little more than a year, it’s clear that the Apple iPhone platform is compelling for developers. But for a while, Apple had the developer world to itself. Many developers fell in love with the slick iPhone user interface and accompanying applications, because it was their first love. But they may be overlooking the time it’s taking them to create applications. They’re taking all night to work in Objective C, the Apple iPhone framework, when they should really only need a half-hour to do the same on WebOS, Sepulveda said. A very high number of iPhone applications then crash at launch, or stall while running, meaning the cost of development on the iPhone is not well understood. For efficiency reasons alone, the WebOS makes sense. RIM, the other popular phone platform, has multiple phones, each with its own flavor. Google’s Android, meanwhile, has been gunning for the role that Sepulevda says Palm’s WebOs has taken. In April, Android co-founder Rich Miner argued Android was the best paltform to build and iterate on because of its more open operating platform.

However, Sepulveda says WebOS is much easier for most up-and-coming developers than Android because its core elements — Javascript, HTML and CSS — are better understood by them. Android is based on Java, which is a language known by lots of developers, but it’s also a beast to grasp. You can have a developer working on web work in Java, another working on middleware in Java, and another on the desktop in Java, but none of them have the knowledge to be effective in each of the other areas. Android has a clear vision, but its framework is still a challenge for most developers to get their head around. It’s easier than working on the iPhone or for RIM’s Blackberry platform, but Pivotal is finding that most of its developers ramped up much more easily on Palm’s WebOS. Another reason is that WebOS comes bundled with things like Prototype, a very popular javascript library that many developers already know. For agile, quick turnaround developers, WebOS is turning out to be a no-brainer.

Finally, the average WebOS application codebase tends to be around 75 percent contained in the application itself, with only 25 percent or so dependent on the framework needed for the particular phone. That makes the codebase easy to transfer to other platforms, where less work needs to be done to code the application for other phones. Clearly, that percentage varies widely, depending on the specific app. For example, if you want to build a mobile application that helps you get around the London Tube system, you’ll want that app to be able to run almost entirely on the device itself, with almost no reliance on the Web at all — because you’ll be underground, where accessing the Web is difficult. So much work is required to tailor the app to specific phones, you’d want to start building that app on the phone with the widest distribution.

We held last night’s dinner to brainstorm our MobileBeat 2009 mobile event agenda. Several of the other attendees, who included mobile investors, executives, and consultants, challenged Sepulveda on his argument. The massive distribution of the iPhone, and easy way to buy apps, make it a much better place for developers to start if they want to make money right away, they said. Famed game developer Trip Hawkins said recently he can sell more copies of a game on an iPhone than he can with a 100 other handsets. That’s because the iPhone App store has trained iPhone users to buy things easily — through their iTunes account. Sepulveda acknowledged this, and said that a developer’s strategy on what platform to choose varies depending on specific goals. However, he then listed another reason why a developer should work with the Pre: The iPhone has 50,000 applications, and it’s hard for any one of them to get attention. With Palm’s Pre, there are only 25 or so applications — it’s a great time to go early with WebOS and get lots of exposure.

In conclusion, Palm’s platform looks really cool. But the burden is on Palm to prove to a majority of developers that they’ll get a payback if they shoot for Palm first, since clearly they’ll be giving up lots by getting to the iPhone or others later.

Are you an entrepreneur or executive active in mobile? Join us at MobileBeat 2009, our mobile conference for industry leaders, where we’ll be debating these ecosystem wars. Sign up soon.