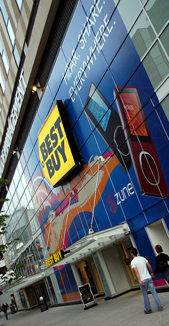 The iPhone is about to become much more ubiquitous on the U.S. retail sales scene. Best Buy, the nation’s largest electronics retailer, is set to announce that it will begin selling the device next month, according to AppleInsider and confirmed by MacNN. This marks the first retailer outside of AT&T stores and Apple’s own stores that will sell the device.

Best Buy’s 970 stores across the U.S. (and 16 Best Buy Mobile specialty outlets) will stock the device September 7. This should significantly reduce the strain on AT&T and Apple store which have seen huge demand for the device since the launch of the iPhone 3G last month.

With the 3G launch, Apple and AT&T wanted to make it harder for people to buy the device simply to unlock it, so it thus far hasn’t allowed online sales and made it so that everyone who buys the iPhone must activate it in stores. This process proved problematic over the device’s launch weekend.

There have also been rumors that Apple is considering selling the iPhone in Radio Shack stores, but that has not been confirmed at this time.

Also no word on whether the Geek Squad (Best Buy’s gadget repairmen) will be able to fix iPhones. But my guess is that you wouldn’t want them to try.