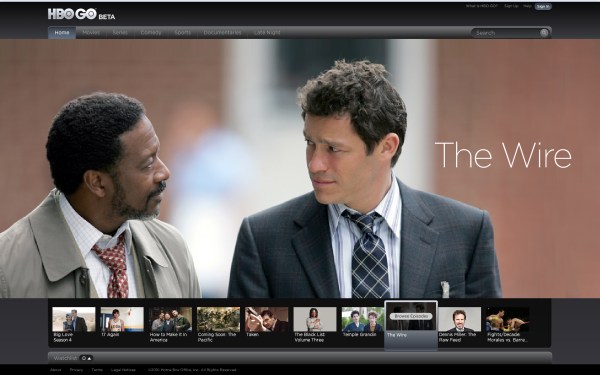 Expect to hear the term “TV Everywhere” quite a bit over the next few years. It’s an initiative by Comcast Corp. and Time Warner Inc. to bring cable content to subscribers via streaming video on the web. Basically, it’s the cable networks’ answer to Hulu and Netflix Watch Instantly.

HBO Go is one of the first attempts by Time Warner as part of the TV Everywhere initiative. The site launched today for Verizon FiOS subscribers, who simply need to log in with their Verizon account information to get access to over 600 hours of content.

HBO Go content has also been available for Comcast customers via the company’s Fancast video streaming site. Comcast customers will eventually be able to log into HBO Go; but currently if they attempt to, they’ll be redirected to Fancast.

I haven’t used the service myself since I’m not a FiOS subscriber, but initial impressions from others are pretty much what I expected. One big complaint is that the service’s 600 hours of content —  which rotates every month — is somewhat limiting. Given that Go has just launched, we’ll likely see HBO increase the amount of content available within a few months.

Ultimately, the difficult part about getting premium content online isn’t the video hosting aspect — it’s the authentication. Comcast/Time Warner’s TV Everywhere is basically just an authentication system for their subscribers.

We recently reported that Brightcove announced a similar platform of its own — the TV Everywhere Solution Pack (TVE-SP). Brightcove’s technology would allow other cable networks, like Showtime and SyFy, to offer their own premium content to subscribers via a single authentication system.

None of these services will convince me to subscribe to cable, FiOS, or satellite TV again, but it’s a start. I’d be far more interested if the cable companies sold subscriptions to their online streaming content on its own. For example, I would pay a nominal monthly fee to be able to stream SyFy’s content on the web. We’re not there yet, but it’s something the cable companies will have to consider eventually.